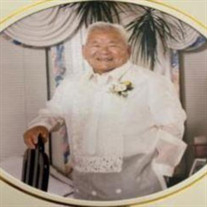 Vivencio Ramos de Guzman 98 years old, of Fremont, CA, passed away on January 24, 2021 due to COVID 19. Vivencio de Guzman was born on November 9, 1922 to Dalmacio and Apas de Guzman. He is survived by his three sons and three daughter-in-laws: Ric de Guzman (Aurora), Fil de Guzman (Emma), Max de Guzman (Marieta) and a daughter and son-in-law, Elizabeth del Rosario (Noli). Eleven grandchildren (Pinky, John Eric, Beverly, Bernadette, JR, Ruel, Vannesa, Joseph, Jona Lynn and Jamie Liz). Five great grandchildren (Tyler, Tyson, Julian, Sydney and Mia). He was predeceased by his spouse Maria Loreto del Rosario de Guzman, parents Dalmacio and Apas de Guzman, granddaughter Maria Fritzie de Guzman, grandson Jeffrey del Rosario. He also leaves many family and friends who will surely miss him. At a young age, Vivencio realized that education and structure was not necessarily for him. His passion was planting fruits and vegetables, and he would often be found in the field alongside his beloved father. Vivencio came from a very close, loving and hardworking family; and from these traits he was able to accomplish the true riches of life. He married the love of his life Loreto, after courting her for 7 years. In 1977, at the age of 55 years old, he moved to USA with the help of his oldest son. He lived in Stockton, Oxnard, Santa Maria, Indio, Coachella and Greenfield in pursuit of employment. Then in 1983 he settled in Delano and was able to buy his first home by working as a grape picker. He upgraded from riding a Kariton to driving a Mercedes Benz. The one word that described Vivencio was “Happy”. He was a gentle, kind and trustworthy man who always brought a smile to everyone he met. His glass was always half full, a simple man with an amazing ability to always live in the moment. He never regretted the past nor worried about the future. He always viewed the world as if he was looking at it for the first time. Through sheer hard work combined by perseverance he became financially independent and was able to invest in his children. As he got older, he would reminisce about his humble beginnings of planting rice to achieving the whole American dream. He remained stress free all of his life. The family requests that all flowers and notes be sent to Chapel of Chimes, 32992 Mission Blvd, Hayward, CA 94544. There will be a Memorial on February 10, 2021 from 4-7pm and Interment on February 11, 2021 from 12-1:30pm at Chapel of Chimes.

Vivencio Ramos de Guzman 98 years old, of Fremont, CA, passed away on January 24, 2021 due to COVID 19. Vivencio de Guzman was born on November 9, 1922 to Dalmacio and Apas de Guzman. He is survived by his three sons and three daughter-in-laws:... View Obituary & Service Information

The family of Vivencio Ramos De Guzman created this Life Tributes page to make it easy to share your memories.