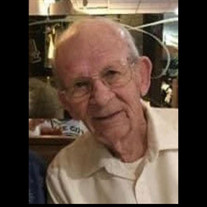 Thomas Neil Hood born in Egypt, Arkansas, April 17th, 1933 was called to God on July 21st, 2020. He is preceded in death by his loving wife of 42 years, Donna Hood, where together they made Fremont, CA home for over four decades. After graduating Moxee High School in Yakima WA, class of 1952, Tom decided to enlist for service with the United States Navy. From 1952 to 1956 he served aboard the USS Tortuga and received a National Defense Medal before being honorably discharged with a ranking of FPP3, Petty Officer 3rd class. After his four years of service, Tom was discharged from the Navy where he promptly went to work as a pipe-fitter at Superior Tool and Die in Glendale, CA. After a year at Superior, Tom went on to hone his craft at Zeno Manufacturing Company in Burbank, CA where he worked for 6 years. During his tenure at Zeno Manufacturing, a close friend of his encouraged him to apply at Nasa Ames Research Center. He and his friend applied and took the test to be an engineer/instrument maker. Tom passed his test, however, his friend did not. Tom decided to accept the position and moved to Mountain View, CA in 1962 to pursue his new opportunity. Tom went on to have a very successful career over the next 26 years at Nasa Ames. During his tenure he received several high awards, honors, and special achievement certificates before his retirement in December, 1988. Even before retiring in 1988, Tom enjoyed fishing with friends, watching WWE wrasslin’ and hittin’ the old slot machines at Harrah’s in Tahoe. “Donna, I’m hot don’t stop me now” (his words, not mine) when pulling on the slot machine post-midnight as she told him it’s time to head back to the cabin. He was an avid Oakland A’s fan and rarely missed a game. He enjoyed attending games at the Oakland Alameda County Coliseum, many of which were with his grandkids. However it was from the comfort of his reclining chair at home where he watched most of the action (not to mention the peanuts were cheaper and he didn’t have to pay for parking.) Tom was well known at the local Mexican restaurant El Patio, in Fremont, where he notoriously ordered the single item beef enchilada dinner with rice and beans. No menu required because he knew what he was going to order before he walked in...and so did they! Ole’! Tom leaves behind his two daughters, Vicki Lynn Garman and Carol Ann Riedle, his sisters Shirley Hodgkinson and Donna Burnett, his brother Gerald Hood, three step children, Susan, Linda and David, and eight grand children: Ricky, Jasmine, Shane, Christopher, Kirsten, Megan, Diane and Michael. He also leaves behind four great grandchildren and many close friends and members of the church. We love you and will miss you very much! We ask that you go out and celebrate the part of his life that brings you the most joy. To ensure the health and safety of our community, we are following all guidelines set by local, state and CDC officials. If you are planning on attending a service, please contact the funeral home in advance, so that we can plan accordingly.

Thomas Neil Hood born in Egypt, Arkansas, April 17th, 1933 was called to God on July 21st, 2020. He is preceded in death by his loving wife of 42 years, Donna Hood, where together they made Fremont, CA home for over four decades. After graduating... View Obituary & Service Information

The family of Thomas Hood created this Life Tributes page to make it easy to share your memories.

Send flowers to the Hood family.