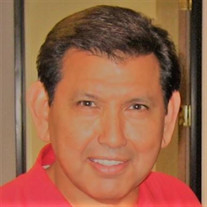 Raul Bonilla passed away on July 6th, 2020 surrounded by family, after a long fight with cancer. He was a loving father, son, brother, and husband, very passionate about every project and interest that he committed himself to, and always keeping his beloved family foremost in his life. He is survived by his wife, Maria, his son, Alejandro, his two brothers, Pedro and Jose, and numerous extended family members, both here and in Mexico. Raul was born in Mexico, the eldest of three brothers. He learned how to take charge at an early age and made friends quickly and easily. Unfortunately, after his mother settled down in the U.S., he was sent to live with relatives in Mexico, due to an immigration error. He returned to the U.S. several years later, knowing both sides of the border. Raul graduated from Livermore High School and joined the Marine Corps, serving in Vietnam before being discharged honorably and coming home. In the 70’s, Raul attended Chabot College and U.C. Berkeley, becoming active in the Chicano student movement as a leader and organizer. He collaborated with student leadership, professors, and student unions to help promote the awareness of Chicano pride, ideals, and developing Chicano coursework in the school system. During this time, he met his wife to be, Maria, and they became inseparable, getting married in 1974. A decade later his son Alejandro was born, opening a new chapter of family life. Raul worked in many fields during his professional career, but what he truly enjoyed the most was working in sales. He first learned the art of the sale as a young employee at J.C. Penney, using his natural charm and friendly smile to full effect. He then found success as a specialist in flooring sales and later traveled abroad as sales manager in a field he once considered only a hobby, computers. In his spare time, Raul loved to stay active, enjoying running for both health and recreation through his entire life. He was a mercurial speaker and would willingly strike up a conversation with anyone, always ready to give his opinion on politics, sports, technology, or current events of any kind. At home, Raul devoted himself to home improvement, both inside and out. He could spend all day carefully tending to his garden, finding himself a natural green thumb. Raul will be missed by all who knew him, and forgotten by none

Raul Bonilla passed away on July 6th, 2020 surrounded by family, after a long fight with cancer. He was a loving father, son, brother, and husband, very passionate about every project and interest that he committed himself to, and always keeping... View Obituary & Service Information

The family of Raul Bonilla created this Life Tributes page to make it easy to share your memories.

Raul Bonilla passed away on July 6th, 2020 surrounded by family,...

Send flowers to the Bonilla family.