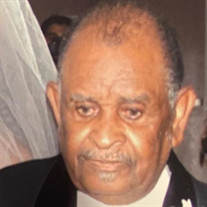 Mr. Otis Elmer Foster Jr was born on March 25, 1930, in Denison, Texas. He was the only child of parents Otis Elmer Foster, Sr., and Mamie Cage. Otis was raised in the Denison area by his grandmother. He attended Terrell Schools, where he obtained his primary education and graduated High School. After high school, Otis joined the US Army. He was honorably discharged after two years of military service. Upon discharge from the service, his cousin Omezelle Gipson (who affectionately called him Bo) sent for him to relocate to Oakland, CA. He resided with Omezelle in El Cerrito and North Oakland, CA. Otis worked several years with a local janitorial/office cleaning company, and he was eventually able to buy out the owner. He was a businessowner and employer of Fosters’ Janitorial, procuring and maintaining contracts for cleaning and janitorial services. He also held a position as a Gardener with the New Haven School District for many years. He retired from the district after having held leadership positions in the California State Employees Association. In March 1963, Otis married Glenna Marie Butler. When Otis met Glenna, she had six children from a previous marriage: Bernard, Jo-dee, Jerome, Paul, Steven, and Debra. Although Otis never had biological children of his own, he was known affectionately as Daddy “O” and served as an amazing father figure. Glenna and Otis resided initially in Oakland and then moved to Hayward. They eventually settled and purchased a lovely home in Union City. The Fosters hosted many family gatherings and provided a loving, structured home for Felicia, Charnetta and Detria during their formative years. As an African American couple migrating to a predominately white suburb, the Fosters began a community societal club and helped to establish the name, Tri-City Afro-American Cultural & Historical Society, representing a group for African Americans in the areas of Fremont, Hayward, and Union City. The couple enjoyed cruises and Otis particularly enjoyed trying his luck by visiting casinos. Some of his favorite pass times were watching football, reading the newspaper, and sitting in the window. After Glenna’s passing in 1991, Otis lived several years in Union City, until he eventually relocated to Stockton, CA. Otis and Glenna were members of Community Reformed Church, Oakland, CA. He became a Church Elder on January 18, 1970. He taught Adult Sunday school for over 30 years. Members have commented about the spiritual impact of his instruction and dedication to his position. Otis remained a member in good standing and was active in Community Reformed Church until his health began to fail and his ultimate relocation to Stockton CA. In 2004, Otis married Yvonne Lois Valencia and added four children to his life: Cheryl, Carolyn, Yvette, and Bobby. Carol was very helpful in caring for Otis until his passing. And special thanks to Sonya and Paul for their role in caring for him as well. On November 1, 2021, Otis entered peacefully into rest at Sedgwick Home in Stockton. He was preceded in death by his parents, Otis Elmer Foster, Sr. and Mamie Cage, his grandmother, his first wife Glenna, and his second wife Yvonne. Otis leaves to cherish his precious memory his son, Paul; daughters, Debra, Charnetta, Cheryl and Carolyn; first cousin, Omezelle Gipson; and a host of grandchildren, great grandchildren, extende

Mr. Otis Elmer Foster Jr was born on March 25, 1930, in Denison, Texas. He was the only child of parents Otis Elmer Foster, Sr., and Mamie Cage. Otis was raised in the Denison area by his grandmother. He attended Terrell Schools, where he obtained... View Obituary & Service Information

The family of Otis Elmer Foster JR created this Life Tributes page to make it easy to share your memories.

Send flowers to the Foster family.