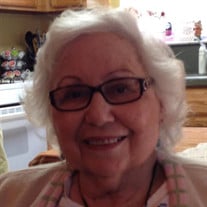 JOSEPHINE MARIE SCRUGGS March 19, 1933 – December 30, 2021 Former Resident of Hayward Josephine was born in Honolulu, Hawaii to Mary Rodrigues and Samuel Weir. She and younger brother, Joe, were adopted at a very young age by Joseph Gordon. She died peacefully of natural causes in Escalon, California. Josephine married Floyd Scruggs in 1950 and they would have six daughters: Kathleen Murphy, Jeannette Bettencourt, Mary Hilton, Eva Scruggs, Karen Lee-Scruggs and Frances Auerbach. She is survived by her six daughters as well as 8 grandchildren, 11 great-grandchildren and 3 great-great grandchildren. She was preceded in death by her husband of 61 years Floyd Scruggs, her brother Joe, and great-grandson Steven Bettencourt. As a child in Honolulu, she witnessed the bombing of Pearl Harbor which influenced her throughout her life. The story was often told and she clearly suffered from PTSD, though that suffering was never acknowledged. Josephine was a hard-working and devoted mother of six children by the time she was 26 years old. She made a 3-course dinner every night for at least eight people and somehow always had an immaculate house. She was a great cook but did not like to share her recipes. As her daughters started to get older and more independent, she began her long career as a retail clerk from which she retired more than 20 years ago. Josephine finally had time for hobbies and hers were playing Bingo and shopping on QVC. She will be sorely missed by her family, friends and QVC, but she has earned the rest. Private memorial services will be at Chapel of the Chimes, 32992 Mission Blvd, Union City, Tuesday, January 11, 8:30 -10:00 a.m., with graveside services at 10:45 a.m.

The family of Josephine Marie Scruggs created this Life Tributes page to make it easy to share your memories.

Send flowers to the Scruggs family.