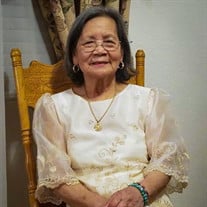 Obituary for Inocencia C. Dingle Inocencia C. Dingle, known as Inez, was a resident of Lathrop, CA, and Union City, CA. She was born to Delfin Chavez and Petra Lepardo on August 24th, 1932 in Alfonso, Cavite Philippines. Inez passed away on March 4th, 2021 in Stockton, CA due to natural cause. Inez immigrated to the USA with her 3 children in March of 1983 and reunited with her late husband, Jose Dingle. Inez was a devout Catholic throughout most of her life and later became a Born-again Believer of Jesus Christ. Inez worked as a babysitter for a couple of years. She took on-the-job training at Vallecitos CET as an Electronics Assembler and thereafter was employed in an electronics firm for several years. After getting laid off from the electronics company, she continued employment in a distribution center of multivitamins until she completed her quarters and retired. Casino trips with family and friends were one of Inez’s favorite things to do. She also enjoyed taking care of her grandchildren and cooking Filipino foods. Inez loved watching basketball and baseball games, Filipino and American dramas, and game shows like Wheel of Fortune and the Price is Right. Many evenings she could be found reading her Bible and devotional books and playing card games. Inez is survived by her children Alex, Delia, Edith, and Florante, her grandchildren Stacey, Michelle, Jeffrey, Abigail, Alyssa, Caleb Jabez, Tom, Iris, Charish, Jayson, Chandel, JC and Jr, her great-grandchildren Carmela, Maleina, Jonas, Cyrus, Phoebe, Summer, Abigail Nida, Luke, and John James; her brothers Damaso and Efren, and her sisters Zenaida and Oming; daughters-in-law Carol, Mayeth. Sons-in-law Tim, Bob, and Harvey, as well as many brothers/sisters-in-law, nieces, nephews, cousins, and friends. Inez is preceded by her parents Delfin and Petra, husband Jose, son Crisostomo, and daughter Nida; sisters Marina and Jacinta, brothers Ricardo, Simplicio, Francisco, Theodoro, and many beloved family members. To ensure the health and safety of our community, we are following all guidelines set by local, state and CDC officials. If you are planning on attending a service, please contact the funeral home in advance, so that we can plan accordingly

Obituary for Inocencia C. Dingle Inocencia C. Dingle, known as Inez, was a resident of Lathrop, CA, and Union City, CA. She was born to Delfin Chavez and Petra Lepardo on August 24th, 1932 in Alfonso, Cavite Philippines. Inez passed away on... View Obituary & Service Information

The family of Inocencia Dingle created this Life Tributes page to make it easy to share your memories.

Send flowers to the Dingle family.