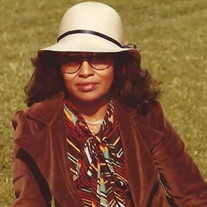 Eva Lois Moore was born August 30, 1937 to the late Herman Buck and Bessie Taliaferro in Water Valley, MS. After her move to Oakland, California, she united with the Kingdom Hall of Jehovah&#8217;s Witnesses where she remained a member until... View Obituary & Service Information

The family of Eva Lois Moore created this Life Tributes page to make it easy to share your memories.

Send flowers to the Moore family.