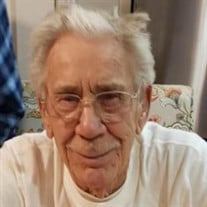 Edward Eugene Keefer a loving father, grandfather, brother, uncle and friend passed away unexpectedly due to COVID-19 complications, he was 85. Ed was born on June 4, 1935 in Zelienople, Pennsylvania to the late Russell & Edna May Keefer. Ed had five siblings, Tom Willets (deceased), Jim Keefer, Joyce Hillard, Gladys Gray (deceased) and Alice Leonberg. Ed grew up in the Evans City, PA area and graduated from Evans City High School in 1954. After graduation, Ed joined the Army and was stationed in Germany. After his service in the Army, he returned to Pennsylvania and started his life long career as a truck driver. In 1960, he wed his first wife, Janet (Kelly) Worthley. They had two children, Tamara and Tracy. In 1963 the family moved to Fremont, California. Ed was a truck driver and mechanic for Miles & Sons and Salt Transport for years and accomplished his dream of buying their first home in 1969. They had a very active social life, attending dances, dinner parties and bowling at the iconic Cloverleaf Family Bowl in Fremont in the 1970’s. As the kids were growing up Ed was involved with the Hayward Twirlettes Club, walking along the parade routes, camping with the Cub & Boy Scouts or coaching various Little League teams. If he wasn’t at work or doing something with the family, he could be found working on the house, a car, truck or boat. Ed loved to go hunting with his in-laws, the Spanglers and Bloomers. He enjoyed camping and boating at Lake Shasta with cousins, the Groves and extended family friends. After his first year of hanging out at Lake Shasta, he got the bug and by the following year, had purchased a ski boat. From that point on, they would go to the delta for day trips and camping at other lake locations. In 1982 he was fishing in the Delta and caught a world record Chinook salmon using a 10# test fishing line and was in the local papers. He even had the fish mounted proudly on his wall. In 1984 he moved to Arizona and married Ivandale (Ivy) Olson, who has preceded him in death. He had three step children, Robert, Sherry and Cindy. He continued working as a truck driver for JB Hunt until his retirement with over 3,000,000 miles driven. Although he retired from truck driving, he was not one to stay at home, so he began working for a few golf courses in the area as a maintenance man. He enjoyed golfing and became a pretty good golfer. He had four hole-in-ones and again, proudly framed the certificates. He remained in Arizona until 2014, at which time he returned to the Manteca, California area and lived until his passing. He continued to enjoy playing golf and boating on a regular basis with Tracy and his family. He would drive down to Tamara’s place and golf with Dan or hang out in the pool. He loved being outdoors. While living in Manteca, he began going to the Manteca Senior Center where he played pool as often as he could with his many friends. Ed was a very generous and kind person and considered his many friends part of his extended family and would help anyone he could. He was loved by many and will be dearly missed. Ed is survived by his daughter, Tamara (Keefer) Escoto and son-in-law, Dan of Bermuda Dunes, CA. His son Tracy Keefer and daughter-in-law Penni of Fremont, CA. Three grandchildren, Kayla Keefer and Kyle Keefer of Fremont, CA and Matthew Escoto of Bermuda Dunes, CA. His step-children, Robert Olson of Tucson, AZ, Sherry Vandevelde of Missouri and Cindy Narducci of Manteca, CA. Seven step-grandchildren and nine step great-grandchildren. His brother Jim and two sisters, Joyce and Alice all of PA. He had numerous nieces and nephews in California, Nevada, Arizona, Pennsylvania and Connecticut. In a private ceremony, Edward will be inurned at the Chapel of the Chimes Cemetery in Hayward, CA. A celebration of life will follow at a later date to be announced.

Edward Eugene Keefer a loving father, grandfather, brother, uncle and friend passed away unexpectedly due to COVID-19 complications, he was 85. Ed was born on June 4, 1935 in Zelienople, Pennsylvania to the late Russell & Edna May Keefer. Ed... View Obituary & Service Information

The family of Mr. Edward Eugene Keefer created this Life Tributes page to make it easy to share your memories.

Send flowers to the Keefer family.