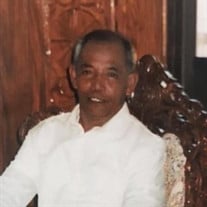 On Friday, September 11th, 2020, Dominador “Danny” Cabardo, beloved husband and father of four children, passed away at age 78. The evening vigil chapel service and limited visitation for family and friends will be held at 5pm on Thursday, October 8th, 2020 at Chapel of the Chimes in Hayward officiated by Deacon Bernard of Saint Anne’s Catholic Church in Union City. The funeral chapel service and burial will follow the next day at 10am on Friday, October 9th at Chapel of the Chimes officiated by Father Geoffrey of Saint Joseph’s Catholic Church in Pinole. Danny was born in Pampanga, Philippines on October 11, 1941 to Susana Requilman and Pio Cabardo Sr. Danny migrated to the US during his teen years. He worked as a farmer and later worked at Kaiser for 20 years where he retired. After retirement, he worked at HARD. He was formerly married to Rose and they had three children, Joseph, Jolene and Dominador Jr. He was preceded in death by his 2nd wife Onching. He later married Juvy and raised their daughter, Angelina. Danny will be remembered as a man who was family orientated; endearingly known to his nieces and nephews as the fun but intimidating uncle. He enjoyed being around his family; inviting anyone on spontaneous trips to Bodega Bay or Reno. Danny was also known to have a green thumb; tending to his garden at his house in Hayward. He also loved fishing and getting lucky at the casinos. Danny is survived by his wife Juvy, his four children, Joseph, Jolene, Dominador Jr., and Angelina and his brothers and sisters, Pio Jr., Josefina, Francisco, Rodolfo, and Lolita, grandsons Jomar, Roen and Reece, and nephews and nieces, Donations may be sent to Jody Cabardo via: CashApp, Zelle or GoFundMe. www.gofundme.com/f/honoring-danny-cabardo CashApp: $jcabardo To ensure the health and safety of our community, we are following all guidelines set by local, state and CDC officials. If you are planning on attending a service, please contact the funeral home in advance, so that we can plan accordingly.

On Friday, September 11th, 2020, Dominador &#8220;Danny&#8221; Cabardo, beloved husband and father of four children, passed away at age 78. The evening vigil chapel service and limited visitation for family and friends will be held at 5pm on... View Obituary & Service Information

The family of Dominador Requilman Cabardo created this Life Tributes page to make it easy to share your memories.

Send flowers to the Cabardo family.