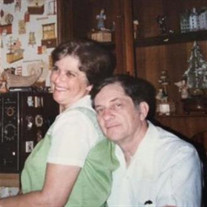 Betty Fairclough, age 90 of Fremont, California passed away 8-27-2021 with her three Sons by her side after a battle with dementia, but more from a broken heart with the loss of her husband and love of her life only nine months earlier. Betty was born February- 02-1931 to Ruth and Richard Camuffo in their home in the Bernal Heights District. Betty had four siblings: Edward, Marge, Dorothy, and Robert. Betty grew up in San Francisco enjoying all that it has to offer and along with her Mother, they walked across the Golden Gate Bridge in 1937 for its Grand Opening. Betty met her future husband (Norman) around 1950 after Norman returned home from WWII service in the Army and their lifelong love affair was born. In March 1952 Betty and Norman eloped to Reno, Nevada to marry and 25 years later in a Church ceremony, they renewed their vows in celebration for their love for each other. Betty and Norman had four children: Kathryn (Kate), Steven, Michael, and David. After starting their family life in Noe Valley California Betty and Norman moved to Marin County in a small house they built with their own two hands on weekends and spare time. In 1964 Betty and Norman moved their family to San Lorenzo Village in California where Betty and her family grounded their roots. Betty was a Go-Go Get-em Mom scooting around the Village in an early Toyota Corona model car usually with her foot to the floor. Betty was active in Little League as well as volunteering at the local hospitals in their Candy Striper program. Betty helped bring in extra needed monies for the family by babysitting (Daycare) and being trusted by local families. As Betty’s kids grew and spread their wings, Betty and Norman took to traveling and seeing the World and its wonders. From China, Japan, Greece, Italy, Germany , and Thailand to name a few. This is what Betty truly loved doing. Betty and Norman moved to El Dorado Hills, California in 1987 after Norman retired from his career with Xerox. And lived a simple relaxing retirement until returning to the Bay Area in 2014 to be closer to their Sons. As a fifth generation Californian, Betty’s heritage and roots to the Bay Area are extremely deep as both Betty’s Grandmother’s Mary Briones (Pablo’s daughter) and Mary Valencia had direct ties with the Anza Expedition in 1775-76. And were early settlers in Yerba Buena before it became San Francisco. Betty is survived by her children: Kate Maney, Steven, Michael and David Fairclough Grandkids: Rachel Maney, Noah Maney, Austin Fairclough, Ryan Fairclough, Kyle Fairclough Great Grandkids:Wyatt Hall, Harry Hall In lieu of any donations to anywhere the family asks to please wear masks, trust science and look out for one another. Because that’s how Betty and Norman Fairclough lived their life!

Betty Fairclough, age 90 of Fremont, California passed away 8-27-2021 with her three Sons by her side after a battle with dementia, but more from a broken heart with the loss of her husband and love of her life only nine months earlier. Betty... View Obituary & Service Information

The family of Betty Louise Fairclough created this Life Tributes page to make it easy to share your memories.

Send flowers to the Fairclough family.