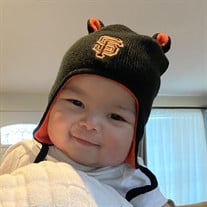 ALEXANDER JUSTIN DE LEON ISON January 10, 2020 - June 10, 2021 Alexander Justin De Leon Ison, nicknamed “AJ”, was everything his parents could have ever hoped for in a child. He was happy, strong, curious, outgoing, and playful. Most of all, he was loving and often leaned in to people to share a forehead touch to show his affection. In return, he was loved immensely not just by his parents, but by anyone who had the pleasure of meeting him. He was baptized into God’s love on May 15, 2021. AJ passed away in his mother’s arms early in the morning June 10, 2021 after an eight month battle with leukemia and lymphoma. He remained the same happy and loving boy for the entire time he was in this world. He was the heart of a campaign that inspired over eleven thousand people to register as potential bone marrow and stem cell donors. It is his family’s hope that AJ’s life and story ultimately helps many others in need of that gift. AJ’s family would like to express their sincere gratitude to the dedicated doctors, nurses, and staff at UCSF Benioff Children’s Hospital Oakland for the treatment and care they gave him. They became a part of his family. AJ is survived by his parents (Eric and Maria). He was their one and only. On his father’s side, he is survived by his grandfather and his wife (Fred and Odessa), two aunts (Melanie and Kim), and three first cousins (Marley, Leila, and Romie). On his mother’s side, he is survived by one uncle and his wife (Alvin and Regie), three aunts (Sally, Joy, and Kathy), and four first cousins (Ian, Russ, Angelo, and Toure). There are also numerous extended family members and friends who will miss him greatly. He joins his maternal grandfather (Ernesto), his maternal grandmother (Virginia), and his paternal grandmother (Edna) in Heaven. AJ's beautiful smile and the sound of his laughter will always be remembered. He will be loved forever.

The family of Alexander Justin De Leon Ison created this Life Tributes page to make it easy to share your memories.