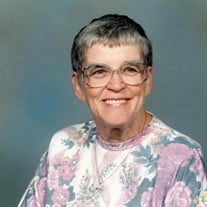 Wilma Balke, passed away peacefully in her sleep in the early morning hours of January 2, 2021 in Vacaville, California. She was 91. Wilma was born on September 4, 1929 in Oakland, California, the only child of William Charles and Maude Mary (DeBord) Schab. Her parents owned a small grocery store in Oakland, and Wilma grew up helping her parents. She enjoyed telling stories of her childhood, helping in the store, and time spent with her parents. Wilma was especially proud of her father, a 32nd Degree Mason, and her own initiation into the Rainbow Girls which was a Masonic youth service organization. Wilma’s mother passed away suddenly when she was 14 years old, which deeply affected her. Wilma lost her father shortly after her marriage and 18th birthday in 1947. Melvin and Wilma were married on February 2, 1947 in Reno, Nevada. They made their first home in Oakland, raising four daughters and helping to raise a nephew. In 1963 they moved to Newark, purchasing a home, where their daughters finished school and made their own way into the world as adults. Wilma was a homemaker for all the 32 years of their marriage. After a year-long battle with lung cancer, Melvin passed away on December 1, 1979. Five years following Melvin’s death in 1979, Wilma sold the family home in Newark and moved to Vacaville where living was more affordable. Wilma never learned to drive, and became well known around Vacaville for walking long distances to her favorite shops. Many family members, and friends, would offer her a ride to her destination only to be told, “I’m getting my exercise”. We would later hear many stories that would start with ”I saw your Mom/Grandma walking way over by ….., but she didn’t want a ride!”. That was Mom. Preceded in death by her husband, Melvin Balke, Wilma is survived by four daughters, Christine (Roly) DeVries of Montana, Sandra (David) Fuentez, Jeanette (Steve) Hillblom, and Tammy Brown of Georgia; one nephew Jerry (Roberta) Simmons; 15 grandchildren; 30 great-grandchildren; 3 great-great-grandchildren.

Wilma Balke, passed away peacefully in her sleep in the early morning hours of January 2, 2021 in Vacaville, California. She was 91. Wilma was born on September 4, 1929 in Oakland, California, the only child of William Charles and Maude Mary... View Obituary & Service Information

The family of Wilma Balke created this Life Tributes page to make it easy to share your memories.

Wilma Balke, passed away peacefully in her sleep in the early...

Send flowers to the Balke family.