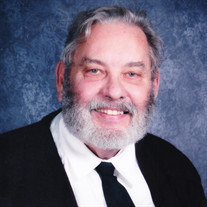 Dr. Walter Benjamin Huckaby went to his heavenly home at age 77 on September 18, 2020. After suffering a stroke in 2018, these remaining two years were a gift his family was very grateful for. His devotion to his family and his firm belief in God supported him throughout his various health struggles struggle and ultimately gave him peace. Walter was born to the late Walter Edward and Ruby Huckaby in Greyspoint, Missouri. on March 5, 1943. He moved to California while still a preschooler. First to Coulton then Terra Bella where, surrounded by olive and other trees, he would listen to the nuts fall off and on to his bedroom roof. He moved to Porterville in the mid 1950’s, graduated from Porterville High School at 17 and joined the Navy. In the Navy he was introduced to and accepted Jesus Christ as his personal Savior and began a lifelong ministry of preaching and teaching the word of God. The highlight of his ministry in the Navy was as Pastor of Grace Chapel, Red Hill, Oahu HI for eight months. He met and married the woman he had been praying for, Kezia Catherine Cryar in the year 1965. Walter retired from the Navy in 1969 and began his civilian career in the ministry at Bethany Gospel Chapel in Oakland California. Over the next 51 years, Walter served many churches in the Bay Area and was deeply involved in the Bay Area Sunday School Conventions. He also taught at various Bible conferences, and camps including Koinonia Conference Grounds. During the later years of his ministry, Walter also taught at Challenger Schools, Vanteus Academy, Christian Community School, Dayspring University, Patten University, Bay City Bible College, and was the principal at Bethel Christian Academy. Walter earned his Bachelors of Theology and his Master of Arts in Biblical Studies from Bay Cities Bible Institute, and his Doctor of Philosophy from Dayspring University. A published writer, he has contributed to Interest Magazine, Family Life Today, and Heaven Touching Earth: True Stories Of Angels, Miracles, And Heavenly Encounters. Walter is survived by his wife Kezia Catherine Huckaby, his daughters Kezia Anne Radke, Didi Huckaby, Joanna Lynn Williams, his son Walter Daniel Huckaby, his siblings Kathy Lewis, Linda Huckaby, Teresa White, Mike Mills, Carl Huckaby, and Dale Huckaby. He is preceded by his parents and his sisters Wanda Jean Huckaby and Leila Huckaby Justice. Walter was a teacher at heart, whether from the pulpit or the classroom, and is dearly missed by his loved ones, who celebrate the fact that he is at peace with his creator. The service for Walter will be held on October 5th. Due to COVID, attendance at the service is limited to the immediate family and selected speakers, the funeral will be live streamed for everyone who would like to virtually attend. Walter will be interred at the Sacramento Valley National Cemetery in Dixon, CA The family gratefully declines flowers and donations, but prayers, condolences and memories are gladly accepted at www.Never-Gone.com/Memorials/walterhuckaby, To ensure the health and safety of our community, we are following all guidelines set by local, state and CDC officials. If you are planning on attending a service, please contact the funeral home in advance, so that we can plan accordingly.

Dr. Walter Benjamin Huckaby went to his heavenly home at age 77 on September 18, 2020. After suffering a stroke in 2018, these remaining two years were a gift his family was very grateful for. His devotion to his family and his firm belief... View Obituary & Service Information

The family of Walter Benjamin Huckaby created this Life Tributes page to make it easy to share your memories.

Send flowers to the Huckaby family.