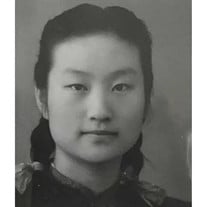 Vivien H. Chen passed away Saturday, August 15, 2020, in Sunnyvale, California, at 90 years old. She was born April 16th, 1930 in Anqing, China to parents Jinzhan Wang and Shenzhan Gao. She married Paul Chen, who was a chemistry teacher at Wuhan University. Vivien had twin girls before Paul went to the United States to pursue his doctorate. Thereafter, their marriage was forced apart due to political tensions between the two countries after the Korean War. Vivien worked as a high school Chinese literature teacher in Wuhan for more than 30 years. She met Zhuzhong Hu, a history teacher at Hubei University Medical School. They married and had two girls. Tragically, Zhuzhong lost his life to political persecution during China’s Cultural Revolution. Nearly 40 years after their original separation, Vivien and Paul reunited, remarried, and had a wonderful life together in California before Paul passed away in 1998. She was then married to Linshu Li, who cared for her in his last years until his passing in 2012. Vivien loved her family fiercely and paved the way for them to emigrate to the US. She was generous, kind, and caring. One would rarely be able to visit her without being offered a melange of snacks, or be bombarded with questions about their health or sleeping habits. Neither children nor grandchildren were spared from the articles she clipped proclaiming that a new carcinogen was discovered, or on the deleterious effects of dairy. She was never afraid to speak her mind, and even if her words reflected her fiery personality, there was never any question that they came from a place of sincere love and concern. Vivien’s family was her world, and she worked tirelessly to ensure that each of them could find health and happiness in this new country together. Vivien is survived by four daughters: Linda Liu, Nancy Chen, Judy Wang, and Elaine Wang; nine grandchildren: Diana Liu, Victoria Liu, Betty Icanberry, Dennis Chen, Kristine Wang, Samuel Wang, Esther Wang, Serena Li, and Desiree Li; six great-grandchildren: Oliver Kloots, Hudson Kloots, Theodore Wu, Kristen Ferraris, Gianna Chen, and Nathan Chen; three great-great grandchildren: Remington Wu, Camilla Ferraris, and Cooper Ferraris; and great-nephew Sida Yang. She will be laid to rest with her longtime husband Paul Chen. Vivien and Paul are loved and will be missed by all the family. A funeral service will be held at Chapel of the Chimes in Hayward, California on Wednesday, August 26, from 9:30am to 11am. Due to COVID restrictions, attendees will be limited and a teleconference link will be available.

Vivien H. Chen passed away Saturday, August 15, 2020, in Sunnyvale, California, at 90 years old. She was born April 16th, 1930 in Anqing, China to parents Jinzhan Wang and Shenzhan Gao. She married Paul Chen, who was a chemistry teacher at... View Obituary & Service Information

The family of Vivien Chen created this Life Tributes page to make it easy to share your memories.

Send flowers to the Chen family.