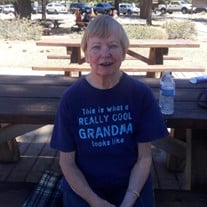 Virginia Lee Arett Palmer, 84, of Hayward, CA, passed away on March 19, 2021 after suffering a fatal brain hemorrhage. Ginny was born on August 14th, 1936 in the city of Austin, MN. While attending Austin High School she met her high school sweetheart, Pete Arett. They wed in 1953, going on to have four children, Deborah, Kathy, Michael, and Pamela, Ginny and Pete moved to California and both landed jobs with the Owens Illinois Glass Company in Oakland, where they worked until retirement. Ginny loved being a part of the bowling team for Owens for many years. After all the kids were grown and out on their own, Ginny and Pete found a new home in Hayward. They had a beautiful marriage of 49 years, until Pete passed away in 1992. A few years later, Ginny met Dale Palmer at a club house function. He fell in love with her right away and asked her on a date. They eventually were married in 2001, beginning a new chapter in her life. Ginny and Dale spent many years traveling by RV throughout the United States together and making new friends along the way, until Dale passed away in 2014. Ginny was very active in her retirement years and loved spending time with family. She went on cruises with Pete. She took trips to Hilton Head with her high school girlfriends. She loved traveling with her family and loved traveling to see them. Ginny loved gambling a little at the casinos in Reno. She was always a pretty lucky lady at the slots. She also won big in Reno by getting to watch her granddaughter April play softball and cheering her on. She enjoyed sewing for all occasions as well as teaching her family how to sew. She created a variety of unique designs over the years including a wedding gown, bridesmaids and flower girl dresses, maternity clothing, Halloween costumes, and outfits for her grandkids. Ginny loved going to Oakland A’s games in person or watching them on TV, going out to eat, and she enjoyed being active in her neighborhood. In 2017 Ginny suffered a stroke. Although these were a difficult times for her, she put in the hard work as her daughter Pam oversaw her care and supervision, and she recovered nicely. In her later years, she enjoyed going on walks with her neighborhood friends especially on sunny days, she enjoyed working on a variety of jig saw puzzles and now has quite the collection, and she loved spending quality time with her family. But, the one thing Ginny loved the most was Christmas. She loved everything about the season, from writing cards to stringing up lights and decorating the yard. Ginny loved baking and decorating homemade Christmas cookies with family, and decorating the tree, as well as anything else she could that needed a little holiday flare. Ginny loved Christmas so much she has an entire shed dedicated to storing nothing but Christmas stuff. Ginny was predeceased by her first husband, Pete Arett, her first born daughter Debbie Arett Grimes, her only son Michael Arett, and her second husband Dale Palmer. There was a great deal of loss in her lifetime, but she overcame these challenges by celebrating life and living for her family. Ginny is survived by her daughters Kathy Arett Whalen and Pam Arett. Her daughter-in law Laurel Kruse-Arett, and her son-in-law Richard Grimes. Her grandchildren Danielle Grimes Freeman and Greg Freeman, Kevin Grimes, Jeffery Waite, Michael Waite, and April Arett. Her great grandchildren Abigail Freeman, Dylan Grimes, Alex Waite, Willow Waite, and Maddie Grimes. Her extended family Carol Bouche, Michelle Pedersen, Vickie Lee, and Drew Sam, and her favorite cat Kaos. In Lieu of flowers we ask that you make a donation in honor of Ginny to the Make A Wish foundation and/or St. Jude Children’s Research Hospital. Two charities that are very special to her heart

Virginia Lee Arett Palmer, 84, of Hayward, CA, passed away on March 19, 2021 after suffering a fatal brain hemorrhage. Ginny was born on August 14th, 1936 in the city of Austin, MN. While attending Austin High School she met her high school... View Obituary & Service Information

The family of Virginia Lee Arett Palmer created this Life Tributes page to make it easy to share your memories.

Virginia Lee Arett Palmer, 84, of Hayward, CA, passed away on...

Send flowers to the Palmer family.