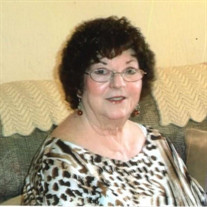 Theresa passed away here at home with family around her, after a long battle with many medical problems especially Alzheimer’s disease. She leaves behind her Husband of 48 years, a Daughter, and a Son. Theresa was in and out of the hospital so many times these past two years. She knew that something was wrong in her head the past year and that the doctors could not help fix it. Throughout this whole time, she seemed to worry more about her family than herself. She kept asking if we were alright and for us not to cry because it would make her sad. Earlier in her life, Theresa was a Den Mother in Cub Scouts, she was a Blue Bird Leader, she was active in her church and her children’s schools. Theresa loved Disneyland, Jazz and Soul music, Country songs, and Rock and Roll. She really enjoyed going to Cache Creek and Graton Casinos with her brother and sister-in-law. For several years she worked for the Davis Street Family Resource Center and the Rota Care Clinic, here in San Leandro. Theresa was a big 49er fan and would watch all the games until the disease prevented her from being able to keep focused on them. She has a 49er poster on her wall in the bedroom and she always slept with one of her 49er blankets covering her. She kept looking at that poster daily and saying 49ers, go 49ers. Theresa loved being with her grand children and was lucky enough to see her little great granddaughter be born. She loved her nieces and nephews and cousins. Theresa has three sisters that she kept in touch with, living in Alaska, Washington State and Nevada. She would ask about them constantly and would talk to them on the phone often. We would like to give a very heartfelt thank you to the Alameda County Firefighters at Station 10 here in San Leandro. They responded so many times to help Theresa and myself. They went above and beyond the call of duty. Thank you to all the ambulance crews that transported her over the years and thank you to all the medical staff at Kaiser Hospital in San Leandro who helped Theresa get better during all the different medical problems she went in with, and Home Health Care also. I know she would want to thank all those and everyone that gave our family support, friends and neighbors, former co-workers of herself and her husband. Theresa was kind, caring, loving and a giving person. She donated to so many charitable organizations, she helped her children out when they needed support with heir families. In her own way, she was a pretty amazing wife and mother taking care of her family. Theresa will be laid to rest at the Chapel of the Chimes Memorial Park in Hayward. No services are scheduled at this time.

Theresa passed away here at home with family around her, after a long battle with many medical problems especially Alzheimer&#8217;s disease. She leaves behind her Husband of 48 years, a Daughter, and a Son. Theresa was in and out of the hospital... View Obituary & Service Information

The family of Theresa Marie Meier created this Life Tributes page to make it easy to share your memories.

Theresa passed away here at home with family around her, after...

Send flowers to the Meier family.