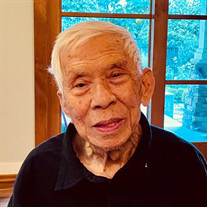 TAT HUU TRAN September 29, 1934 - December 31, 2021 On Friday December 31, 2021, Tat Tran passed away at his home surrounded by his wife, children and grandchildren. Several years ago, he was diagnosed with Alzheimer's. It was tremendously difficult for him to cope with this disease. While his family is deeply saddened with the loss of a dedicated husband, father and grandfather, he is at peace. After 87 years of life, he will always be remembered for the life lessons that he modeled as a son, brother, husband, father, grandfather and friend. Tat was born in Saigon, Vietnam and lived the first 40 years of his life there where he became a civil engineer and married his wife, Kinh Nguyen. He later had three children before he left his country in 1975. Tat started a new life journey as an immigrant in San Pablo, California. He quickly adapted to the new environment and found his first job as a civil engineer at Bechtel. He quickly formed new close-knit friendships with coworkers and strengthened old ones in the US with former classmates. Music and his love for regular social gatherings cultivated a supportive community which helped his family ease into a new life. After years working at Bechtel, he transitioned to work for the City of Hayward until his retirement. His retirement years included traveling with his wife, picking up the grandchildren from school and playing the guitar for them, going to weekly lunches with his lifelong friends, and having daily afternoon snacks with his sister and brother in-law, Ngo & Diep Le. Tat centered his life around family and friends. Life’s hardships were faced together as a family and successes were celebrated with humility. He was a mentor and teacher. Challenges were overcome with hard work, patience, and an unrelenting will to persevere. He never shied away from taking on responsibilities and was always willing to extend a helping hand when needed by any family members or friends. He looked to his friends to share his passion for music and conversations that satisfied his inquisitive mind. Music was an integral part of who Tat was. It was his expression of joy and his means of connecting with others. Throughout the years, he enjoyed singing and playing guitar for his family and friends, and inspired others to join him. Tat leaves behind his wife, 3 children, 5 grandchildren, and all of the people he has come to know and who will hold him in their hearts.

TAT HUU TRAN September 29, 1934 - December 31, 2021 On Friday December 31, 2021, Tat Tran passed away at his home surrounded by his wife, children and grandchildren. Several years ago, he was diagnosed with Alzheimer's. It was tremendously... View Obituary & Service Information

The family of Tat Huu Tran created this Life Tributes page to make it easy to share your memories.

Send flowers to the Tran family.