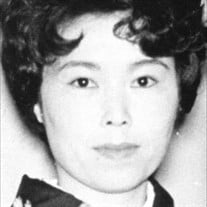 Sumiko Hayashida Kring, 86, of Hayward, CA, entered into rest at her home on April 6, 2021. Born in Nagasaki, Japan, on December 2, 1934, Sumiko excelled in many handcrafts as a child. As a young lady after WWII, she was a gifted seamstress and later worked for a large company in Japan until a tall handsome Navy man came into her life. Douglas R. Kring and Sumiko met in Sasebo and were wed in 1961. They moved to San Diego, and in September of 1963, their son Daniel was born. After Douglas returned from Vietnam, they settled into a house in Hayward, where she continued to live until her end of life - 49 years. Sumiko loved taking classes in Japanese Tea Ceremony and continued to pursue her interests in Japanese culture such as Ikebana (Japanese Flower Arrangement) and Origami to hone her talents. Sumiko’s greatest passion was being able to assist cancer survivors with their self confidence and dignity. In 2005, she and Douglas opened a shop in downtown Hayward, SHK Boutique (An Elegant Form), where they provided stylish, flattering reconstructive essentials and clothing. Sumiko closed her shop some years later due to Douglas’ health, but she always kept up-to-date with cancer awareness literature and continued to be a devoted supporter of the American Cancer Society. Being an avid seamstress, she continued to sew and craft items for the Hayward Senior Center boutique until 2020 when shutdowns occurred. Sumiko was preceded in death by her parents Satoru and Kisa Hayashida, brother Kiyoshi Hayashida, brother-in-law Yasuyuki Matsumoto, all of Japan; parents-in-law Morris and Anna Kring of Fremont; brother-in-law Roswell Kring of Washington; and her husband, Douglas Kring (married 51 years). She is survived by her sisters Teruko Stipe of Idaho and Shigeko Matsumoto of Japan; son Daniel (Katia), grandsons Daniel and Maximillian, all of Hayward; nephew Warren Kring, niece Mary Hoefel (Mike), their children Jennifer and Bradley, sister-in-law Norma Kring, all of Washington; niece Eileen Mahaffy (Brian), their sons Alexander and Tyler of Idaho; nieces and nephew Michiyo and Kayo Hayashida, Mitsuyo, Eri, and Yoshihiro Matsumoto; sister-in-law Taiko Hayashida; and many other relatives in Japan. A private family internment will be held.

Sumiko Hayashida Kring, 86, of Hayward, CA, entered into rest at her home on April 6, 2021. Born in Nagasaki, Japan, on December 2, 1934, Sumiko excelled in many handcrafts as a child. As a young lady after WWII, she was a gifted seamstress... View Obituary & Service Information

The family of Sumiko Hayashida Kring created this Life Tributes page to make it easy to share your memories.

Send flowers to the Kring family.