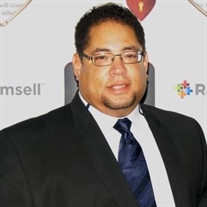 IN LOVING MEMORY Stephan Burnett Sr. 3/17/1957- 9/2/2020 Stephan Burnett Sr., age 63, passed away Wednesday, September 2nd, 2020 in his home in Hayward, CA. Stephan is survived by his wife, Julie; his children, Regina, Chaz, Stephan Jr., Aysia, Marquez and Briana; his grandchildren, Dusan, Ari, Mahkai, Alex (Junior), Shyanne, Jaden, Lorenzo, Jalen, and Cassie; his great grandchildren; and his siblings Ricardo, Eric, Danielle, Guy, Dawn, Josiah, Angelique, and Cheryl. He is predeceased by his parents and his sister Marcia Burnett. Stephan was born on March 17, 1957 in Indianapolis, Indiana to Floyd and Janet Burnett. Shortly after, they moved their family to San Francisco, CA. In his early 20’s, he went to work for Osram Sylvania Lighting Services. He retired after being there for over 30 years as a Project Manager. During that time, he also enjoyed driving for numerous bus and limo companies. On December 6, 1980, he married Julie, his wife of 40 years. Stephan was a devoted husband and dedicated father to his 6 children. He enjoyed taking the family on leisure drives and often loved driving to the beach and exploring the surrounding areas. He loved music tremendously and was an amateur singer, played keyboard and bass guitar. He contributed in a band as a child with his brother, Eric and their friends growing up in San Francisco. He was also very involved in his church and participated in the choir and led worship services for many years. He will be deeply missed by his family, friends and all that knew him. A private memorial service will be held by his family once arranged

The family of Stephan Burnett Sr. created this Life Tributes page to make it easy to share your memories.