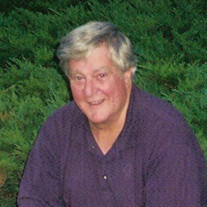 Robert Anthony Hoffer August 3, 1935 – March 2, 2021 Robert Anthony Hoffer, 85, of Union City, California passed away at home on March 2, 2021 following a battle with cancer with his family by his side. Bob was born on August 3, 1935 at 5pm in Mt. Angel, Oregon. According to one of his many stories, he was born on his aunt's dining room table when the 5 o’clock whistle blew at the creamery. Bob is the son of Edward and Mayme Hoffer. He graduated from Mt. Angel Prep, joined the Army in 1955 and went to business school. Bob married Nella Barendse of Hubbard, Oregon on February 11, 1961. His job as a manager at General Electric took him and his young family to Union City, California in 1969. After several years with GE and Burke Industries, he went into real estate managing properties until his retirement. He was the president of both the Metro-East Jaycees in Oregon and the Union City Jaycees in California, a JCI Senator of Oregon and was a board member of the Union City Football League. Bob loved fishing, bowling, and golfed into his 70's. He had a great sense of humor, loved to tell stories of his youth, and give his informed opinion of "what they oughtta do...". Bob is preceded in death by his parents; brothers Paul, Gene (Ida and Rose), Gil, and Victor (Margaret) Hoffer; sister Leona (Ken) Kehoe; brothers-in-law Ralph Kleinschmit and Bill Dixon; nephews Steven Hoffer, John Hoffer, Victor Hoffer III, Tim Kehoe, and Scott Mathews. Bob is survived by his wife Nella, daughters Pam (Phil) Young and Kristin Hoffer; sister Regina Kleinschmit; sisters-in-law Helen Hoffer, Velma Burkert and Nancy Dixon; brother-in-law Ron (Carolyn) Barendse; grandchildren Harrison, Jackson and Madison Young and Hannah Ericson and many, many, nieces and nephews he loved very much. The family will have private services in California. Additional services will be held in Mt. Angel, Oregon on a later date.

The family of Robert Anthony Hoffer created this Life Tributes page to make it easy to share your memories.

Send flowers to the Hoffer family.