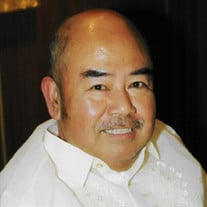 Rio Solis Deleon, 72, of Fremont, CA, passed away at home, surrounded by his loving family. Some say he invented the Dad Joke, famous for asking “What’s your name, ?” A celebration of his life will be held on Wednesday and Thursday, September 16-17 at the Chapel of Chimes in Hayward, California from 5PM-9PM. A funeral mass will be held at Holy Spirit Church in Fremont, CA on Friday, September 18th in the morning at , which will be held outdoors. He will be laid to rest following the mass at Chapel of the Chimes in Hayward where he will be given full military honors. To ensure the health and safety of our community, we are following all guidelines set by local, state and CDC officials. If you are planning on attending a service, please contact the funeral home in advance, so that we can plan accordingly. Rio was born on April 10, 1948 in Biluso, Silang, Cavite to Guadalupe Solis Deleon and Florencio Obrador Deleon. He joined the United States Coast Guard in 1969, and was married to his loving wife Soledad Madlangbayan Deleon in 1974. In their 46 years of marriage, they travelled the world, planted roots in America, and raised a family in Ketchikan, Alaska, where they lived for over 20 years before moving to Fremont, CA. Rio proudly served in the Coast Guard for 20 years, retiring as a Senior Chief. He was stationed in Guam, Alameda, Hawaii, Sacramento and finally Ketchikan before retiring to raise his family. There he worked for the United States Postal Service for 20 years, served as President of the Filipino Community, and started his own business. Forever he will be loved by his wife Soledad, his 3 sons Rodel, Rommel, and Ruel, his grandchildren Cassilyn, Jordan, Kaden and soon-to-be Baby #4 of Fremont and San Jose, California, and his brother Danilo Solis Deleon of Ketchikan, AK. He was preceded in death by his parents, and his brothers Ninoy and Antero Deleon

The family of Rio DeLeon created this Life Tributes page to make it easy to share your memories.

Send flowers to the DeLeon family.