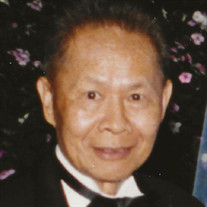 Richard Maycon aka “Carding”, was born to Mariano Maycon and Herminia Madriaga on November 21, 1921, in Subic Bay, Zambales, Philippines. A beloved Husband, Father, Father-in-law, Grandfather, Brother, Uncle, and Friend, Richard Maycon left us on August 7th, 2021 after a brief and sudden illness at Washington Hospital in Fremont, California. Richard was preceded in death by his children, Dan, Helene and Renie; sisters Feliman and Adoracion. He is survived by his devoted wife, Pita Maycon of 68 years; Sisters Mercy Maycon and Vi Maycon; Daughter, Nora Maycon; Son, Dave Maycon; Daughter, Shirley Maycon-Thomas; Daughter, Marlene Gomez ; Daughter, Lorraine Maycon; Daughter-In-Law, Ji Maycon; Son-In-Law, Stanton Thomas; Son-In-Law, Josh Gomez; Son-In-Law, Errol Riego. Grandchildren; Marissa Escalante, Christopher Castaneda, Adrian Gomez, Kyle Castaneda, Tiffany Maycon, Elijah Maycon, Jaylen Reliford, Jacob Gomez, Brianna Maycon, Alyssa Gomez, Timothea Maycon, Ezekial Riego. Great Grandchildren; Tristan Castaneda, Taylor Escalante, Isaiah Escalante. Great-Great Grandson; Thomas Castaneda. Along with numerous loving nieces and nephews. Richard at an early age courageously enlisted in the US Navy and served in both the Korean and Vietnam wars. Following the war, he was employed at the Alameda Naval base until he officially retired in 1986. Richard and wife Pita were active members of the League of Filipino American Veterans, where they developed many special lifelong friendships. Together they enjoyed ballroom dancing, fun trips to the casino, and countless festivities. A Bay Area resident for over 58 years, Richard enjoyed gardening, exercising, dancing, eating good food, and watching sports. Aside from spending time with his ‘darling’ Pita, Richard’s favorite pastime was to be spent trying to win big at the horse races. Being a great gardener he took pride in the many fruit trees and vegetables that helped him lead his healthy lifestyle. Known for always exercising, well into his later years you’d catch Richard on the stationary bike or shadow boxing with dumbbells. His strength and passion for health and fitness is passed on to his kids and grandkids who are inspired to stay active. Following in his footsteps, many of his children and grandchildren are athletes, coaches, and dancers who take after his athleticism. While he was a very healthy man, he still appreciated good food at the buffet where he would eat like a King. No matter how hungry he was, Richard always took time to say a prayer before enjoying his meal. Richard was well known for his fun and positive sayings such as, “Don’t give up the ship,” and, “I scream for Ice Cream,”. We will always remember the way he shuffled his playing cards, sang along to Elvis, and predicted the winner of every sports game. Richard was a very positive and caring man. His presence will be sorely missed. With him in our thoughts, we celebrate the gift of life the way that he did.

The family of Richard Maycon created this Life Tributes page to make it easy to share your memories.

Richard Maycon aka “Carding”, was born to Mariano Maycon and...

Send flowers to the Maycon family.