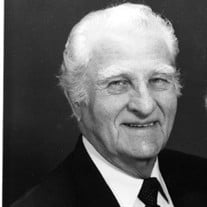 Raymond was born in Orton Flat, South Dakota, September 12, 1925, to Erick August and Ingeborg Erickson, Swedish and Norwegian immigrants who homesteaded in South Dakota. He graced this earth with an abundance of love for God and family. He proudly served during WWII in the US Navy, flying on the PBY Catalina planes as a communications tech. He continued his work with the Department of Defense as a Qualified Assurance Representative overseeing government contracts in what is now called, Silicon Valley. He retired in 1982 with the love of his life, Maureen Erickson, his wife of 63 years, who preceded him in death in 2016. Dad was a great father, grandfather, great grandfather, uncle and friend. In retirement, he collected and repaired old radios, raised award winning canaries, and crafted wooden whirly-giggs that he affectionately called, “foodies,” which highlights his keen sense of humor. He grew the most beautiful roses, had an amazing avocado tree and kept the Nordica House in Fremont in tip-top shape for hosting many family gatherings. In his eighties, he would look forward to receiving a load of gravel to be moved to his back yard. He is survived by children, Spence (Pat), Brad (Missy), Joni Canada (Gary), Sonja Clifford (Jeff), and brother in law, Harold Gibson (Linda). Being the youngest of 12 children, he leaves behind scores of Erickson relatives throughout the state and country. In his final years, he thrived with our loving sister’s family, the Canadas. He taught many, that even with the frailties of age, one can meet the challenges head on and live a productive life, loving and receiving the loving blessings of many. On November 29th, he earned a trip to be with mom and our Heavenly Father. He passed peacefully, at the breakfast table. Dad was an amazing man, his own person, a great provider and fierce defender of his family. His legacy lives on in all those that came in contact with him.

Raymond was born in Orton Flat, South Dakota, September 12, 1925, to Erick August and Ingeborg Erickson, Swedish and Norwegian immigrants who homesteaded in South Dakota. He graced this earth with an abundance of love for God and family. He... View Obituary & Service Information

The family of Raymond Erickson created this Life Tributes page to make it easy to share your memories.

Send flowers to the Erickson family.