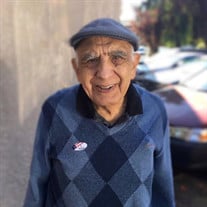 RAUL F. TORRES June 29, 1932 — January 10, 2021 Beloved husband, father, and papa quietly passed away in his home the morning of January 10, 2021. Born in Providencia, Zacatecas, México on June 29, 1932, Raul was raised in Mexico City D.F. At age 18, he served in the Mexican National Army (Ejército Nacional Méxicano) and studied engineering for two years at La Universidad Nacional Autónoma de México. His love of fixing anything and everything originated from helping his father, Ignacio, in his electrical shop installing electricity in office buildings. When his father became sick, he had to close his shop and Raul had to leave university to find other employment and help his family. Raul delivered pharmaceutical samples to laboratories on his bicycle, where he took initiative and devised a plan to streamline his company’s delivery services. Afterward, Raul secured a position in an upscale restaurant that provided him with a multitude of colorful experiences that he loved to retell throughout his life. Raul immigrated to the United States in 1955, at the age of 23, and enrolled in the Army upon entering the country. His Army appointment was deferred for two years while he studied English at Oakland Technical High School. During these two years, he also worked as an ILWU Warehouseman at Albertsons Milling Company in Oakland. The same day he successfully passed the required English courses, he was ordered to board an Army bus to Camp Roberts. He was inducted into the Army on November 1, 1957. He was honorably discharged as a Private First Class on October 29, 1959, and served in the Army Reserves through October 31, 1963. Raul began his service in the Army with six weeks of basic training at Camp Roberts and was trained in Supply Acquisition in St. Louis and New York City. He was then sent by boat from New York City Harbor to Germany. He said it was a “rough 8 days.” He was in charge of ammunition distribution of rifles and bullets for the training exercises. After three months, he was told there was a mistake since only U.S. citizens were authorized to be in that remote training location. He was ordered to return immediately to the barracks and wait for new orders. His next assignment was in Hanau outside Frankfurt where he worked in the food warehouse that supplied 28 companies all over Europe. He worked his way up from filling pallets in the warehouse to managing the company requests in the office. He also traveled in his off-time to vacation in Madrid, Spain, his favorite location. At the conclusion of his active duty, his general expressed his gratitude for Raul’s exceptional work by sending him back to the United States by plane instead of boat, an act that Raul appreciated as a proud Army veteran. Upon returning from the Army, Raul returned to Oakland and resumed his job at Carnation Company (formally Albertsons Milling Company). He was quickly promoted to a machine operator position. He then transitioned to Guittard Chocolate company in 1983 and remained there until he retired in 1997. Meeting his wife, Julia M. Torres, at a wedding in the Bay Area led to a courtship and a marriage 12 months later on August 19, 1962. Together they had four loving children; Julie, Raul, Leticia, and Cristina. Raul and Julia settled in Union City in 1968 to raise their beautiful family. He was a proud Union City resident for over 52 years. Raul became a U.S. citizen in 1964. As a bilingual United States citizen, he enjoyed helping others understand government and financial documents/requirements. For over 45 years, he was sought after by many family members and friends for advice and assistance with filing annual income tax returns. A true Oakland sports fan of the Raiders and A’s, he enjoyed hosting and attending tailgating events with friends and family. He was a proud Raider’s season ticket holder, from the 1970’s - 1982 and again when they returned to Oakland from 1995-2007. More recently, Raul became a huge Warriors fan and rooted for his championship squad in his favorite team gear, a blue and yellow Warriors jacket. After retirement, Raul kept himself sharp by joyfully completing the daily Wonderword and Numberpath puzzles in his local newspaper. His family cherishes the memories of watching his favorite shows with him, Caso Cerrado and Family Feud. He especially enjoyed attending and supporting his grandchildren Justyna, Joey, and Julia with their many school and extracurricular activities. He never hesitated traveling to Las Vegas or Los Angeles to watch them compete or perform. However, Raul was not just known as Papa to them but to all of Nana’s daycare children. Raul is survived by his loving children Julie Medina, husband Robert Medina, Raul Torres Jr., wife Alicia Torres, Leticia Torres, and Cristina Torres; grandchildren Justyna Torres, Joseph Medina, Julia Medina, and Evania Kross, husband Brad Kross. He is preceded in death by his beloved wife Julia M. Torres of 55 years. All those who knew and loved him will remember Raul for his sense of humor, energetic spirit, and generous nature. His family will miss him dearly but is comforted knowing that he has rejoined his beloved wife of 55 years — Raul and Julia, Papa and Nana, together again, for eternity. 💕

The family of Raul F. Torres created this Life Tributes page to make it easy to share your memories.

Send flowers to the Torres family.