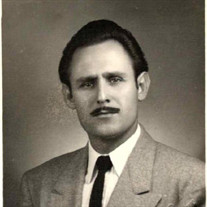 ﻿Rafael Gonzalez Rojo, 98 of Union City, CA passed away peacefully on June 1, 2021. Rafael was born in Malaga, Spain on March 18, 1923 to Manuel Gonzalez Cabrera and Agustina Rojo Juarez. On March 28, 1939, Rafael left Spain during the Spanish Civil War at the age of 16 from the port of Alicante to Oran as a stowaway on the Stanbrook ship. Due to his age, he was placed in a French concentration camp to work the railroad until he escaped in 1941. In 1942 he boarded the Nyassa ship from Casa Blanca, Morocco to Vera Cruz, Mexico. There he eventually made his way to Mexico City where he was taken in by his cousin Pepe. Rafael was always grateful to President Cardenas for accepting the Spanish Refugees with open arms. In 1943, he migrated to the United States and lived in San Jose, CA. After a long courtship, he married Annamaria (Tillie) Rodríguez on December 26, 1951 and eventually settled in Union City. They had six daughters. At a very young age, Rafael started working with his grandfather cleaning and fixing rentals and worked in a factory with his uncle during the Spanish Civil War. During his early years in the US, he worked in the crop fields and canneries. After dedicating 27 years to Kaiser Aluminum Can Company in Union City as a printer machine operator, he retired in 1991. He loved spending time with family and friends. Rafael loved music and dancing. He and his wife would light up the dance floor especially when it was Swing or Mambo music. He enjoyed traveling especially to Spain every year to visit his family. He loved walking and growing his habas, chili’s, tomate y pimientos. He was proud of his daughters and grandchildren’s achievements and always encouraged them to work hard for a better life. He is survived by his loving wife, Annamaria Rojo, his daughters Tina Mercado, Martha Padilla, Patricia Sousa, Mercedes Rojo, Yolanda Garcia, Tillie Zelman. Son in law’s Gerry Padilla, Mario Garcia, Santos Ramirez, Brian Zelman. Grandchildren Mario Garcia Jr., Annamaria Sousa and Erica Garcia. He is preceded in death by his parents, brother’s Manuel (Manolo) G. Rojo, Jose G. Rojo, sister Francisca (Paquita) G. Rojo de Ramirez, son in law Steve Mercado.

The family of Rafael Gonzalez Rojo created this Life Tributes page to make it easy to share your memories.

Send flowers to the Rojo family.