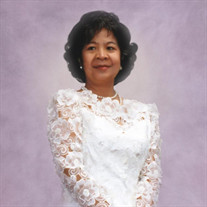 Perla Balolong Cruz passed away peacefully on Saturday, October 30th, 2021. She was born on December 21, 1940 in Bonuan Gueset, Dagupan City, Philippines to parents Victoria and Gregorio Balolong. Perla was the 3rd oldest of 10 children, and the eldest among the 4 girls. She graduated from the University of The East in Manila with a degree in Accounting and soon immigrated to the United States in 1968 where she started her career as a professional CPA. In 1970 she met her future husband, Teofilo Cruz, and within 1 year they were engaged with a set wedding date of August 28th, 1971 at Saint Barnabas Church in Alameda, California. After the wedding, they moved to Granite City, Illinois where they were blessed with the birth of their 2 sons, Aristotle Henry and Gerald Vincent. In 1975, the young family moved to California and settled among family in Union City until the present time. After working 20 years for the City and County of San Francisco she retired. In August 2021, Perla and Teofilo celebrated their Golden 50-year wedding anniversary at Saint Anne Church in Union City, California. They loved to travel with family to Europe, Hawaii and enjoyed cruising among the seas. Perla would often venture to the local casinos where she loved to play the slots which she was very successful at. In her past time, she loved tending to her many orchids which she would sing and tend to daily. She will be remembered for her generosity and kindness towards all. Perla is survived by her husband, 2 sons, grandchildren- Tyler, Nicholas, Kaitlene and Klay Cruz, and her sister, Nenita Desonglo and brother Tito Balolong. She will be missed dearly.

Perla Balolong Cruz passed away peacefully on Saturday, October 30th, 2021. She was born on December 21, 1940 in Bonuan Gueset, Dagupan City, Philippines to parents Victoria and Gregorio Balolong. Perla was the 3rd oldest of 10 children, and... View Obituary & Service Information

The family of Perla Balolong Cruz created this Life Tributes page to make it easy to share your memories.

Send flowers to the Cruz family.