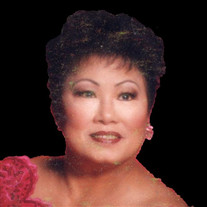 Norma Yeo Macasocol Odfina was born in Pampanga, Philippines on June 5, 1945, to Agapito and Fortunata Macasocol. She was second of eight children: Julia M. Perez, Jose Macasocol (deceased), Agapito Macasocol, Jr. (deceased), Reynald Macasocol (deceased), Teresita (Tessie) M. Olano, Roberto Macasocol, Sr., and Lucilla (Lucy) M. Lesaca. After graduating from hairdresser school in Manila, she found work at a neighborhood beauty salon. In early 1965, Norma met her future husband and father of her children, Irenio (Rene) Odfina, Sr. She met Rene by chance when he arrived in Bacalaran asking for directions to a governmental building. After that day, began their courtship. On December 24, 1966, they were married at Santa Rita Parish Church followed by a large celebration held at their family home in Baclaran. Norma and Rene continued to live and work in Baclaran, she a hairdresser, he a construction worker. A couple of years later, they started their family, and she gave birth to two sons, Ronald M. Odfina, and Ramon M. Odfina (Michelle {Missy}). In 1970, they migrated to the U.S. and landed in San Francisco, CA. She worked in a bridal shop for a few years before deciding to grow their family and gave birth to three more sons, Rene M. Odfina, Jr., Rudolph M. Odfina (Liza Marie), and Renato M. Odfina. They eventually moved out of San Francisco and settled in Daly City, CA to raise their family. While Norma held down a full-time job in Housekeeping at El Rancho/Best Western Inn in Millbrae, CA, she also worked part-time at Ms. Kit Beauty Salon in Daly City continuing her hair styling work. She added make-up artist to her skill and loved to beautify her clients. She was even photographed in the Manilla Newspaper (Daly City Edition) with actor, Jun Aristorenas. As her beautician work slowed down, Norma continued at El Rancho/Best Western Inn dedicating 30 years of hard work. Her hard work never went unnoticed and was recognized by all her peers, finally retiring in 2010. She is not only survived by her husband and sons but also her grandchildren: Arielle Cristine, Cory Cristofer, Bailey Gardner, Gemma Mae, Kaden Elijah, Kaia Marae, Alanii Rae, and Kaelah Rian. Norma and Rene later moved to Hayward, CA so she can be closer to her sisters. And they sure did a lot together too! They traveled to Tacoma, WA and Dallas, TX but her favorite was to Paris, the Philippines, and to Hawaii. The sisters are always laughing, joking, and just having a good time together. Norma loved to cook for her family, especially her boys and grandkids. What always put a smile on her face was going out and shopping whether it be for her or the grandkids, didn’t matter. Just as long as she went out. She enjoyed hanging out with her friends in Daly City, loved to play Bingo A LOT and play Mahjong every chance she could. But when she was at home relaxing or babysitting, her favorite was watching TFC. Norma was loved by her large family, friends and relatives, and she will be truly missed. Her memory will live forever in our hearts and never be forgotten. Until we meet again… Rest in peace.

The family of Norma Macasocol Odfina created this Life Tributes page to make it easy to share your memories.

Send flowers to the Odfina family.