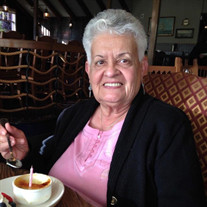 Miriam Flores, age 89, of San Leandro, CA passed from this world and into the presence of her Lord and Savior on December 24th 2021. She passed of natural causes. She was loved by so many and her presence among us will be sorely missed for years to come. Miriam was born on May 29th 1932 in Humacao, Puerto Rico to Narciso and Paquita Solero. She was one of seven children born to “Belo” and “Nana”. Miriam lived in Puerto Rico until August 1948 when she and her family picked up roots and moved to San Francisco CA to follow her oldest sibling Noe, her husband Vicente who was in the Army and their daughter Ruthie. In 1948 Miriam attended Mission High School in San Francisco. Between 1948 and 1949 Miriam and her family moved across the bay to Berkeley CA. Miriam graduated from Berkeley High School in 1949. Between 1949 and 1954 Miriam worked for Wells Fargo Bank in downtown San Francisco. It was during this time that Miriam would meet her future husband Roberto Flores. During this time Roberto was in the Navy and was stationed at Hunters Point Naval Shipyard. He was looking for a place to worship and it was at a meeting at 1st Baptist Church in San Francisco that he would meet Miriam. Roberto wanted the fellowship of a Spanish speaking congregation and was asked to visit a church Primaria Iglesia Bautista across the bay in Oakland which was led by Rev. Narciso Solero. It was there at that church that a relationship developed and in 1954 Miriam and Roberto would join together in marriage at Melrose Baptist Church in Oakland, CA. Miriam and Roberto would remain married for 51 years until Roberto’s passing in 2005. Together Miriam and Roberto would raise a family of five children. She is survived by three boys and two girls. David, Samuel, Daniel, DeeDee and Anna and their spouses. Miriam not only leaves a legacy of five children, she also leaves nine grandchildren, Courtney, Rachel, Katie, Nicholas, Natalie, Amy, Stephen, Ashley, Cody and the spouses of her grandchildren. Miriam also leaves five great grandchildren Jose, Anthony, Jackson, Eliana and Georgia. She leaves her remaining siblings Hulda Deherrera, Ebenezer Solero and Paco Solero. In addition to her children, grandchildren, great grandchildren and siblings, Miriam leaves many loving nieces and nephews who will forever miss Auntie Miriam. Those that have predeceased her and join her in Glory are Roberto C Flores, Rev Narciso Solero, Paquita Solero, her siblings sister Noelia Cortes and brothers Hector and Narciso Solero. Miriam and her family worshipped for many years at Manor Baptist Church in San Leandro and Three Crosses Church in Castro Valley. She would also work at the extended day care at the former Manor Baptist Christian School and as an office assistant at Redwood Christian High School in San Leandro. Miriam obtained her cosmetology license and would pursue a part time career at JC Penney as a hair stylist. She was also an avid sports fan. She followed the Giants, A’s, Raiders, Forty-Niners and the Warriors. But of all sports Miriam loved was baseball. Miriam played fast pitch softball in her younger years and was an exceptional player. May we always keep the memory of Miriam in our minds and in our hearts but most of all let’s remember that first and foremost she was a follower of our Lord and Savior. This belief is her enduring legacy that she would share with her children as they too would become followers of our Lord and Savior. Visitation will be at Chapel of the Chimes in Hayward CA in the Reflection Chapel January 11th from 4:00pm to 7:00pm Funeral Service will be at the Chapel of the Chimes in Hayward CA in the Mission Chapel January 12th from 10:00am to 12:00pm Burial will also be at Chapel of the Chimes in Hayward CA at 12:15pm

Miriam Flores, age 89, of San Leandro, CA passed from this world and into the presence of her Lord and Savior on December 24th 2021. She passed of natural causes. She was loved by so many and her presence among us will be sorely missed for years... View Obituary & Service Information

The family of Miriam Elsie Flores created this Life Tributes page to make it easy to share your memories.

Send flowers to the Flores family.