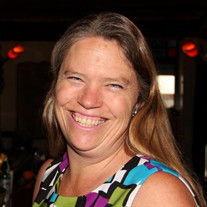 Michelle Lovett, born in Ridgecrest, California to Jack and Merylin Lovett on September 8th, 1965, passed away suddenly at her home in Castro Valley, CA on May 30th, 2021. Michelle grew up with her two older brothers John and Roger, and her younger sister Jeanine. Shortly after Michelle was born, the Lovett family moved to San Diego, were she spent her entire childhood, except for 2 years (1972-1974) when the family lived in Puerto de Santa Maria in southern Spain where her father worked as a scientific advisor to the US Navy Fleet Weather Command at ROTA Navy Base. During that time Michelle discovered her love of languages and became fluent in Spanish. After her return to San Diego, she attended Point Loma High School, where she played on the state champion volleyball team. Sports and outdoor activities were a passion of Michelle’s. After high school, Michelle moved to the San Francisco Bay Area, where she resided for the remainder of her life. She studied molecular biology and Spanish at UC Berkeley, and after graduation worked briefly at a South San Francisco biotech company. From 1988 to 2004 she worked as a lab manager in biological and medical research facilities at both San Francisco General Hospital and UCSF: From 1988-1992 in the Welch Lab (SFGH), and from 1993-2002 in the Bunnett Lab (UCSF). During her time at UCSF, she worked with Postdoctoral Fellows from many countries including Italy, Germany, China, Russia, France, the UK, and more. Michelle began studying Italian at San Francisco City College and started visiting her new friends in Italy. Within a few years she become fluent in Italian and picked up many Italian culinary secrets from her friends and their families during her month-long visits. In 1999, Michelle met Torsten Fink, who had just moved to the United States from Germany. In addition to studying French at that time, Michelle also began studying German shortly after they started dating. In 2002, Michelle accepted a position in the Agard Lab at the prestigious Howard Hughes Medical Institute at UCSF. Her most notable achievement there was the successful implementation of the then novel phage display process. She attended a training course at Cold Spring Harbor Lab in New York to learn about this technique. There she met Nobel Laureate Dr. James Watson. In 2003, Michelle and Torsten were married, and in 2004 Michelle gave birth to their only child, Carl. Michelle always loved children, so she made the decision to leave her successful career in science in order to dedicate her life to raising Carl. She volunteered at Carl’s elementary school as a parent educator, and later became an active participant in the National Science Olympiad Program in which Carl successfully participated annually, throughout middle and high school. Michelle loved gardening and devoted many hours to creating sanctuaries for plants and wildlife in her backyards, first in Hayward (2003-2012) and then Castro Valley (2012-2021). She discovered that hummingbirds are attracted to salvias (sages) so she began to educate herself about those flowers. She eventually became a recognized salvia expert and was invited to two international salvia conferences, where she met and became friends with many like-minded individuals. Michelle’s passion, enthusiasm and curiosity allowed her to glean new skills and quickly become an expert. The Fink family’s love of hummingbirds took them to destinations such as Costa Rica, Ecuador, Peru, and Trinidad and Tobago, where they encountered more than 70 different species. Michelle loved to travel and meet new people from different backgrounds and cultures, and always travelled off the beaten path during her many trips to Europe, South and Central America, and Australia (in 2014). Another passion of Michelle’s was music. She supported Carl in acquiring basically all of the woodwind instruments, and becoming proficient at playing the flute, piccolo, oboe, English horn and various saxophones. Michelle and Torsten volunteered with several school music programs, such as the marching band. Around 2012, Michelle, Torsten and Carl discovered a spiritual home in the Hayward Starr King Unitarian Universalist Church, where shared core values included curiosity, tolerance, the protection of nature, and standing up for what is right. Michelle’s funeral service will be held at the Chapel of the Chimes in Hayward, CA. If you would like to attend, please RSVP to [email protected] Her final resting place will be the Lone Tree Cemetery in Hayward. In lieu of flowers, donations may be made to the Nature Conservancy (www.nature.org/en-us/) in Michelle’s name.

Michelle Lovett, born in Ridgecrest, California to Jack and Merylin Lovett on September 8th, 1965, passed away suddenly at her home in Castro Valley, CA on May 30th, 2021. Michelle grew up with her two older brothers John and Roger, and her... View Obituary & Service Information

The family of Michelle Lovett created this Life Tributes page to make it easy to share your memories.

Michelle Lovett, born in Ridgecrest, California to Jack and Merylin...

Send flowers to the Lovett family.