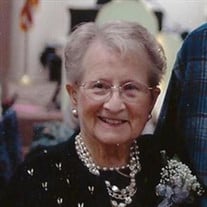 Mar. 17, 1917 - Dec. 01, 2020 Maude Spann, 103, Passed away peacefully with family by her side on Tuesday December 1. Maude was born in Murray, KY on March 17, 1917, to Roscoe Robertson and Virginia Carter Robertson. She had older siblings Margaret and James. In 1922 her younger brother Virgil was born. Sadly, their mother died at that time. Maude and her brother Virgil then went to live with their uncle and aunt, Johnny and Mattie Robertson. At age 10 Maude went to live with her sister Margaret in Detroit Michigan. Maude remembered going to school there in the wintertime with the snow being over her head. At age 16 Maude traveled alone by bus to San Francisco to live with her brother James. She graduated from The High School of Commerce in 1935. She then began working for Benioff’s Furs. In 1937 she travelled back to Michigan to visit her sister and family who were preparing to move to Clifton, Arizona. Maude traveled with them since this leg of the trip put her closer to returning to San Francisco. Arriving in Clifton she decided to stay for a bit to help her sister get established. And then it happened! She met a hansom sailor! Charlie Spann was returning home after serving four years in the Navy. She thought she had met the love of her life but after two years of dating she was not so sure. She worked at the Martin Theater and then for the phone company which she liked but the relationship with Charlie did not seem to be going anywhere. She quit her job and moved back to San Francisco. After about two days Charlie started calling every day. Before the month was over, Charlie was in San Francisco taking them to Phoenix to get married on December 8, 1939. Back in Clifton Maude finally had a home of her own. They welcomed their first born, Lawrence (Larry) into the world and they were told they would not be able to have any more children. After the long-term electrical project Charlie had been working on ended, they moved to Oakland California. It must have been quite a shock for Charlie after living in Arizona all those years. In Oakland it was too rainy, too foggy, and too cold so after two years they moved to Phoenix Arizona. It was not long before Charlie was working on a runway installing flood lights. It was 116 degrees in the shade and there was not any shade. He wondered, where is the rain, where is the fog, where is the cool weather. Maude and Charlie vowed they would move back to California when they could. It took some time. In the meantime, they got a call from Maude’s sister Margaret. Margaret’s doctor husband was going to deliver a baby from one of his patients and she was putting the child up for adoption. Sometime later the baby was born on December 11 and two weeks later the family was on the plane to Oakland to pick up their “Christmas” Carol. About three years later they moved back to Oakland. Two years later they moved to San Lorenzo where Maude and Charlie lived for the next 65 years. Part of the reason they were able to stay in their home for so long was due to the Meals on Wheels program. Not only was this service valuable to them, but they were also able to give back by appearing in TV commercials and on billboards from California to New York City for Meals on Wheels. They enjoyed family trips to their cabin in Boulder Creek and in later years took a number of cruises. The highlight was a trip to the Panama Canal on their 70th wedding anniversary where they renewed their vows in front of the ship’s captain. They were quite the talk of the ship. During their time in San Lorenzo, they participated in PTA, ELKS, Homes Association, and were very active in the leadership of “The San Lorenzo Sociables.” Maude was a friend of Bill W for 55 years. She served in the District Office, was part of a traveling group that put on a play at many locations. Even more important to her was the opportunity to mentor many women over the years. Several people have told the family that Maude changed their lives. When her beloved Charlie passed in 2017, they had been married 77 years. In 2018 Maude moved to Pacifica Senior Living in San Leandro. Although she dearly missed Charlie, she was happy with her new home. She made very nice new friends and loved the team that took such good care of her. The family also feels blessed by loving care Maude received right up until the end. They were also blessed by Continuum Hospice Care team that not only cared for Maude too but were so caring and helpful to the family. She will be dearly missed by all who knew and loved her. Maude was predeceased by her parents, Rosco and Virginia Carter Robertson, husband Charles, her siblings Margaret Rowland, James Robertson, and Virgil Robertson. She is survived by her son Lawrence Spann (Fran), daughter Carol Newsom (Bob), many grand, great grand and great great grandchildren and many nieces and nephews. Due to the Covid-19 virus no services are scheduled at this time. She will be placed next to Charlie in a niche at Chapel of the Chimes 32992 Mission Blvd., Hayward CA94544. Memorial donations in Maude's name may be made to: SOS/Meals on Wheels, 2235 Polvorosa Ave #260, San Leandro, CA 94577

The family of Maude R Spann created this Life Tributes page to make it easy to share your memories.

Send flowers to the Spann family.