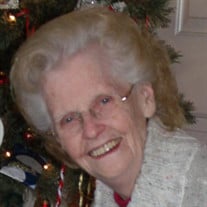 Margaret Squires When you think of style and class, many things may come to mind. For us it’s ankle bracelets, flawless manicures, a family room referred to as a bar room... And our mother/grandmother/great grandmother. She was the definition of a lady, from her perfectly styled hair to her well-planned dinner parties and family events, to beautifully wrapped presents. No detail was left out. Margaret Ann was born on July 11, 1932 to Glenn and Opal Nickell. She was the youngest of two children: two years younger than her brother Glenn. She graduated from San Leandro High School in 1950. That same year she married John Davidson and together they had four children: John Greggory (1951), Mary Margaret (1954), Victoria Elizabeth (1955), and Phyllis Ann (1956). In 1964 she married Richard Squires and remained married to him until his passing in 1999. Her first grandchild and only grandson, Anthony, was born in 1979. He was followed by five granddaughters: Amanda Jennifer (1982), Lee Ann (1983), Jennifer (1984), Jessica (1984), and Dannielle (1985). Like many women, being a grandmother was something she enjoyed to its fullest. Back to school shopping was her specialty. You were sure to show up on your first day with the latest kicks, cool binders, a rad backpack, and probably at least one sweatshirt that was a bit more her style than yours. But all would agree that she found her true calling when her first great grandchild, Gulianna, was born in 2004. Then came Noah (2010), Cameron (2012), Russell (2015), Nathan (2016), and Celyne (2017). She was somehow able to love each one of us as if we were her favorite. Margaret endured many battles in her life - starting with a heart condition that was diagnosed as a young girl, multiple breast cancer diagnosis and treatments, as well as being preceded in death by her son Greg, sons in law Calvin (Margaret, Amanda, Dannielle), and Tony (Vicki, Anthony, Lee Ann, Jennifer, Jessica), granddaughter Lee Ann, and great grandson Russell. Through it all she somehow managed to teach us all an ongoing lesson on approaching life with grace no matter the circumstances. Margaret’s legacy will live on not only through her children, grandchildren, and great grandchildren but through our families as well: Jim (Phyllis), Linda (Anthony, Noah, Cameron), Gerry, Junior (Amanda), Cliff (Jennifer, Celyne), Jovi (Jessica, Gulianna), and Tom (Dannielle, Nathan). She will be missed by many, loved by all that knew her, and cherished in our hearts forever. In lieu of flowers the family asks that donations be made to the American Heart Association in Margaret’s memory.

Margaret Squires When you think of style and class, many things may come to mind. For us it&#8217;s ankle bracelets, flawless manicures, a family room referred to as a bar room... And our mother/grandmother/great grandmother. She was the definition... View Obituary & Service Information

The family of Margaret Squires created this Life Tributes page to make it easy to share your memories.

Margaret Squires
When you think of style and class, many things...

Send flowers to the Squires family.