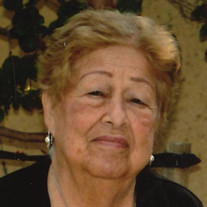 Beloved wife, mother, sister, friend and Grandmother. Lucy Fortune was born in Iloilo, Philippines on October 25, 1925 to parents Elijah Fortune and Restituta Hortinela. She was the eldest of 6 children- Harvey, Alice, Henry, Nelly, Mary. She was a natural beauty, and caught the eye of Jose A. Bets. They courted and married on January 14, 1944, when Lucy was 19 years old. She was a devoted wife and Mother. Giving birth to 8 children- Jose Jr, Ronald, Jesse, Henry, Gerard, Lucy Lynn, JoAnn and Randolph. Raising her children was the joy in her life. She had the most special bond with each of her children. But, Her true calling was being a Grandmother. Over the years, she became Grandmother to Maricel, Jesse Jr, Joseph, James, Harold, Jeffrey, Jesselee, Derek, Maurice, Almond, Yoko, Leslieann, JR and RJ. After immigrating from the Philippines to the United States, Lucy and Jose Sr moved to Union City, California where they cared for some grandchildren at their home. She enjoyed cooking, sewing, gardening, crochet. In the 80s they moved around a bit, from Union City to Florida, before finally settling in Fremont, California. Jose Sr doted on all Lucy’s needs. Their love had only grown stronger over the years. Their love was like no other. They did every together. Married for 65 years until his passing in 2009. Although she lost the love of her Life, she moved into her newest role with ease. She was now the Rock of our growing family. She was the life of the party always, she was a joy to be around. She always made sure you were happy and full. Even at 95 years old, she was still strong. She walked everyday and enjoyed family parties and outings. We will always miss her. Thank you all for loving her the way that we do. Your love and support means everything during this time. She is survived by 5 of her 8 children, 14 grandchildren, 23 great-grandchildren and one great-great-grandchild.

The family of Lucy Fortune Bets created this Life Tributes page to make it easy to share your memories.

Send flowers to the Bets family.