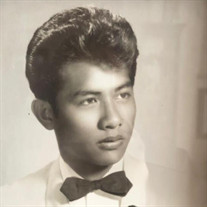 Lope (Lou) Aguirre Arante, 81, beloved husband and father, went home to be with the Lord on December 9, 2021. Lou was born on September 25, 1940 to Lamberto Magboo Arante and Maria Aguirre in Batangas, Philippines. Lou came alone to the United States to San Francisco, CA at the young age of 12, while his father served in the United States Merchant Marines. While his father was away at sea, Lou lived in a dorm and attended St. Mary’s run by the Christian Brothers. Two years later, his mother, Maria, and younger sister, Ana, joined Lou in San Francisco. Lou attended Sacred Heart High School, and later San Francisco City College, where he met his sweetheart, Norma. Lou and Norma married on July 15,1962. Lou and Norma expanded their family from two to three with the birth of Joe on February 14, 1964. Ten years later their family again expanded from three to four with the birth of Richard in October 1973. Lou instilled the importance of family values, hard work ethics, and the love of sports in his sons. Through his career, Lou was employed as a store manager of retail stores such as Walgreens, JC Paper, Russell’s, Gemco, and Value Giant just to name a few. True to form, Lou worked hard to build his stores to be the best they could be. Lou had an unshakeable commitment, integrity, and determination in everything he did. Lou retired from working in 2000. Lou’s favorite hobby was to work with his hands, spending his retirement building projects around his home. His greatest joys were his family whom he loved spending time with, going to Disneyland and DisneyWorld, going to the casino, and was an avid fan of the San Francisco 49ers and Giants, and the Golden State Warriors. Lou passed away holding the hands of his wife, Norma and son, Richard. Lou is survived by his devoted wife of 59 years, Norma, sons Joseph and Richard Arante, daughter-in-laws Diane and Denise, and grandchildren Emily, Laura and husband Jamil Kassam, AJ, Andrew, and Nicholas, sister Ana, nephew Paul Dimapasoc and wife Sylvia and children Hanna, Devin, Bella, and Noah, niece Jennifer and husband John Chapman, and nephew Ryan Gagnon. Lou has touched the lives of countless individuals. He will be loved, missed, and will always and forever live in our hearts. Chapel of the Chimes, Hayward Visitation: December 27 4pm-7pm Vigil: December 28 4pm-7pm Funeral service: St. Anne’s Catholic Church, December 29 10am Interment: Chapel of the Chimes, Hayward

Lope (Lou) Aguirre Arante, 81, beloved husband and father, went home to be with the Lord on December 9, 2021. Lou was born on September 25, 1940 to Lamberto Magboo Arante and Maria Aguirre in Batangas, Philippines. Lou came alone to the United... View Obituary & Service Information

The family of Lope A. Arante created this Life Tributes page to make it easy to share your memories.

Send flowers to the Arante family.