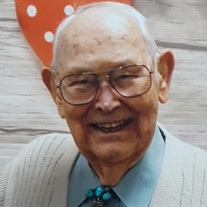 John "Jack" Milton McClellan, Jr. February 27, 1929 - December 14, 2020 Jack peacefully left his home on earth for his new home with his Heavenly Father at the age of 91 in Fremont, CA. Born in Madera, CA, to John and Grace McClellan, he spent his childhood in lumber camps throughout the Sierra Nevada where his father was a millwright/sawyer. He graduated from Hayward High School in Hayward, CA in 1947 and after working various jobs got his Contractor's license in 1953. He worked as a superintendent for Bodily Construction in Fremont, CA. for 18 years, during which time he oversaw the building of over 1000 homes and apartment complexes. While in Fremont, Jack was very active in youth sports, helping form the Fremont youth baseball league and volunteering his time and expertise to help build Nordvick Park for little league baseball. He loved football and coached Pop Warner football for many years. He also served as a school board member, church deacon, Cub Scout leader, and helped build the Fremont Boys club. He became a Mason in 1954 and faithfully served for 66 years in various capacities, becoming a Master Mason at more than one lodge. He was also active in the Ben Ali Shriners and Scottish Rite. As a young man, Jack became an avid fly fisherman. His favorite place to fish was on the Trinity River. He made annual trips there for over 50 years with his wife, children, and good friends. Jack settled in El Dorado county in 1972, where he established McClellan Builders, Inc. For 34 years he built residential homes and commercial buildings. One of the most rewarding projects he built was the Masonic Lodge in Placerville. He retired to the Masonic Home in Union City, CA in 2005. Always a leader, he got the abandoned woodshop up and going, started a gardening group, which supplied their cafeteria with over 2000 pounds of vegetables. He also designed and helped build an Outdoor Degree site at the home. Lastly, he took up remote control airplane flying and was instrumental in getting a paved landing strip built on the Masonic Home property. He is survived by his wife, Jackie McClellan, his children, Kathy Kellett, Michael McClellan (Patty), Kathy Buteyn (Rick), and Kim Quadros (Randy), 6 grandchildren, 15 great-grand children, and 20 great-great grandchildren. Jack's most endearing trait was unconditional love. Family was everything to him and you could always find him reminiscing and delighting in his growing family. Donations may be made in Jack's honor to Shriners Hospital for Children - Sacramento. 2425 Stockton Blvd., Sacramento, CA 95817.

John "Jack" Milton McClellan, Jr. February 27, 1929 - December 14, 2020 Jack peacefully left his home on earth for his new home with his Heavenly Father at the age of 91 in Fremont, CA. Born in Madera, CA, to John and Grace McClellan, he spent... View Obituary & Service Information

The family of John Milton McClellan Jr. created this Life Tributes page to make it easy to share your memories.

Send flowers to the McClellan family.