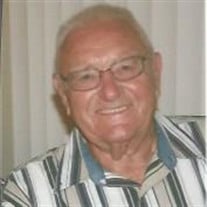 Obituary for: Jerry Dean Dore February 3, 1930 to March 1, 2021 Resident of Pleasanton On March 1, 2021, Jerry passed away peacefully at his home, reuniting with his wife Mary in heaven. He led a great long life, but his departure provides us here on earth with one last “opportunity to increase our pain threshold.” Jerry was born in Sidney, Montana on February 3, 1930 to George Edward and Myrel Irene Dore. He spent his childhood playing outdoors with cousins and friends. In high school in Faith, South Dakota, he skated by academically for the sole purpose of staying eligible for sports, and graduated in 1948. He then joined the Air Force where he narrowly avoided getting assigned MP duty and instead became a crew chief for the F-82 fighter plane in the Korean War, a role he cherished. He was honorably discharged in 1952 in Roswell, New Mexico, where he met the love of his life and future wife, Mary Nettie Hemler. They married on September 6, 1952 and moved to California to start their life together. In California, his mother and brother Bill badgered him to go to college—so he did—and he graduated from San Jose State in 1957 with a degree in physical education. After graduation, he found his true calling as a football coach at San Lorenzo High School, where he taught for 30 years. He coached some great athletes, but loved all of his players. He worked with talented and dedicated coaching staffs over the years, and with their support, he did well enough to be inducted into the San Lorenzo High Athletic Hall of Fame in 2006. He taught PE and science and sponsored the backpacking club. He also coached B-level basketball early in his career and badminton late in his career. After retiring from teaching in 1988, he served in the tasting room at J. Lohr winery, where his talent for storytelling went well with the wine. In 1998, he and Mary moved to the mountains, where they enjoyed many 4-5 pm happy hours. If you showed up at 5:01, you missed it. When Mary passed away in 2010, Jerry moved to Vineyard Estates in Pleasanton, where he enjoyed the weekday coffee group, Friday evening Cheers, playing bocce ball, and coaching the bocce players. The court at Vineyard Estates is dedicated as the “Jerry Dore Bocce Ball Court.” Jerry was a man of varied interests and many stories. In addition to his passion for sports, he was an avid gardener; amateur lepidopterist (look it up!); stained glass artisan; and antique beer bottle collector. He authored the Western Crown Top Beer Bottle Guide, which he considered a years-long father/daughter project. He was full of stories: growing up stories, war stories, football stories, family stories. All conversations were peppered with sayings about thermocouple leads, the xiphoid process, proper incubation periods, cedar chests, and more. He always charged more for perfect. Jerry is predeceased by Mary, his wife of 57 years, and by his brother Bill. He is survived by his sister Marlene of Spearfish, South Dakota; daughter Denise and her husband Jeff of Livermore; son Jay and his wife Patti of Newark; grandson Dustin and his wife Megan; grandchildren Keith and Kaitlin; great-grandchildren Ella, Zoey and Noel; brother-in-law and sister-in-law Chuck and Carol; many nieces and nephews; and extended family and friends. Family and friends meant so much to him. We were all his sons and daughters, to whom he would never hesitate to give of himself. He took us into his home, stood by us, coached us, loved us. The family extends its gratitude to Jerry’s long-time caregiver Michele Garcia. In lieu of flowers, donations can be made to Hope Hospice, 6377 Clark Ave. Suite 100, Dublin, CA 94568, www.hopehospice.com. A celebration of Jerry’s life will be held at a later date in order to accommodate those who loved him and continue to love him.

Obituary for: Jerry Dean Dore February 3, 1930 to March 1, 2021 Resident of Pleasanton On March 1, 2021, Jerry passed away peacefully at his home, reuniting with his wife Mary in heaven. He led a great long life, but his departure provides... View Obituary & Service Information

The family of Jerry Dean Dore created this Life Tributes page to make it easy to share your memories.

Send flowers to the Dore family.