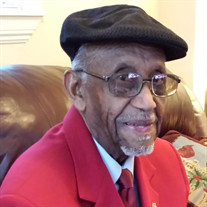 James King Jones, 89, passed away peacefully on June 13, 2020 in his home surrounded by family. Born on June 28, 1930 in Parrot, GA, he was the seventh of his parents’ eight children. Left to cherish his memory are three children - Sherry Jones Howard (Oklahoma), Karen R. Jones, and James Kevin Jones; six grandchildren, eleven great grandchildren, one great great grandchild, a host of nieces, nephews, cousins, masonic brothers & sisters and close friends. Mr. Jones was preceded in death by his loving wife of 56 years, Rosella James Jones; parents John Jones, Sr. (Papa) and Paula “Pauline” King Jones (Big Mama); five brothers - Robert, Roger, John Jr., Calvin & Charlie C. Jones, two sisters - Ossie Jones Davis & Flossie Jones Fowler, and his beloved canine buddy R.E.D. (whose name meant “Restoring Everything Damaged”). The grandson of Reverend Choice & Millie King, Mr. Jones was baptized at an early age and remained a Christian of the Baptist faith all his life. He was a member of Palma Ceia Baptist Church in Hayward, CA. During the latter years of his life he also regularly attended online church services at Redemption Church, San Jose, CA. After graduating from George Washington Carver High School in Dawson, GA in 1948, Mr. Jones attended Albany State University in Albany, GA before enlisting in the United States Air Force in June 1949. He served our country for 8 years, receiving an Honorable Discharge in 1957 having achieved the rank of Technical Sergeant. While enlisted he completed training at three technical schools and worked as the NCO-IC for the 727th Tactical Control Squadron. Mr. Jones retired from the Federal Aviation Administration after 27 years of service as an Air Traffic Controller, having attained the position of Supervisory Facility Training Officer. He worked at the Terminal and Enroute facilities of the Federal Aviation Administration centers in the cities of Cleveland, OH, Oberlin, OH and Oakland, CA. His masonic journey began in 1964 in Ohio where he served in several houses - Blue Lodge, Sidonia #93 (Elyria), Scottish Right Bazaeel Consistory #15 (Cleveland), and the York Rite, Royal Arch Mason (Elyria). Mr. Jones demitted to California where he was an active member of Monarch Lodge #73 and served as Worshipful Master (1987); Victoria Consistory #25 where he was elevated to 33rd degree. He served actively in the houses of Regina Chapter #67; Abyssinia Chapter #5 as Excellent High Priest (1982) and was awarded the title of Honorary Past High Priest (1986). Mr. Jones was an active member of Nettie B. Pergeson Chapter #36 Heroines of Jericho and served as Worthy Joshua (1981). With Menelik Temple #36, he served as Illustrious Potentate (1988), Temple Recorder (16 years) and was awarded Recorder Emeritus (2007). He also served as the Grand Lodge Auditor (1 year), Grand Heroines of Jericho Auditor (7 years) and served as the appointed Imperial Recorders Cashier (7 years). James King Jones lovingly embraced and readily responded to the many names his family and friends gave him. His wife, mother, sisters, brothers, in-laws, and some friends called him King. His children knew him as Daddy, Dad and Pops. His son’s restaurant “Pop’s Deli” is named after him. All his grandchildren and their friends knew him as Papa and Granddad. His children’s friends knew him as Mr. Jones. He was lovingly called Uncle King by all his nieces and nephews. Some of his friends called him JK. His masonic brothers and sisters called him Noble Jones and JK. He was Brother Jones to his fellow church members. Whatever name he was called, Mr. Jones made a positive impact on the lives he touched. He will be remembered as a man of honor with a servant’s heart – faithful, upright, and true. He was a lover of God and His Word. He was a vigilant, mighty warrior and great provider. He was a true friend. He was a man of sharp wit and tongue with the heart of a lion and the compassion of a teddy bear. He was a mentor and readily helped others. He took many into his home and provided shelter, food, and support in their times of need. He was a father to the fatherless. Funeral services for Mr. Jones will be held at the Chapel of the Chimes in Hayward, CA. The Wake (Quiet Hour), Funeral and Internment will be livestreamed. The family invites all to stop by his page on the Chapel of the Chimes website and share encouraging words, memories, and photos. These will remain forever. Anyone interested in attending the livestream event can request the viewing link by emailing [email protected] SCHEDULE OF EVENTS Viewing & Quiet Hour - Monday, July 6, 2020 from 4:30 pm – 9:00 pm. Masonic Order of Service Honoring James K. Jones – Monday, July 6, 2020 from 6:30 pm – 7:30 pm. Funeral - Tuesday, July 7, 2020 at 11:30 am Interment - Tuesday, July 7, 2020 - immediately following funeral service

James King Jones, 89, passed away peacefully on June 13, 2020 in his home surrounded by family. Born on June 28, 1930 in Parrot, GA, he was the seventh of his parents&#8217; eight children. Left to cherish his memory are three children - Sherry... View Obituary & Service Information

The family of James K. Jones created this Life Tributes page to make it easy to share your memories.

Send flowers to the Jones family.