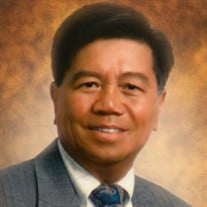 Ignacio Laxamana Espinoza, known by most as Espi, was born in San Matias, Pampanga in the Philippines on February 19, 1938 to Carlos de Guzman Espinoza and Tomasa Pusong Laxamana. He grew up working on his family’s farm and helping raise his three brothers and four sisters as the eldest child. Espi valued education from a young age, completing high school despite having to substitute in as foreman of the sugar mill when his father briefly fell ill. After high school he moved to Manila to broaden his work experience and pursue higher education. During this period in his life he met and eventually married Melinda Suzara – they had 5 children together: Alicia, Belen, Clara, Danilo, and Elaine. They were married for 25 years. Nine years after moving to Manila, and while raising a family, Espi graduated with a Bachelor’s of Science in Commerce from Far Eastern University. He worked as a cost accountant for some time before being drawn by the financial opportunity in sales and making a career change. This led him to begin a career as a life insurance agent starting off as a sales representative for Manila Bankers. Espi climbed the company’s hierarchy until he eventually became president of his own agency and received the high honor of District Manager of the Year. After his successful stint with Manila Bankers, he went on to repeat his success with other life insurance companies, including Insular Life, in a career that would span four decades. Through his work in insurance he became a lifetime member of the Million Dollar Round Table for 23 years. He was also a charter member of the Rotary Club of Makati Guadalupe in the Philippines. In 1987, Espi married Ederlinda Rodriguez and they immigrated to California. Together they had 3 children: Faith Kristine, Ignacio Jr., and Gizelle Camille. In his free time, Espi enjoyed playing sports. Throughout his life he invested time in excelling in bowling, pelota, tennis, and finally golf. He has a whole bookcase full of trophies. Although Espi accomplished much in his career and in sports, he was most proud of the accomplishments of his children and his grandchildren. Investing in others, especially the next generation, was a hallmark in his life. Espi helped financially support some of his siblings through college, as well as each of his children, and many of his nieces and nephews. He also helped found the PAMSAT Class of ’57 Education Foundation, an organization that helps support his high school classmates’ children through schooling. Espi went to be with the Lord on August 6, 2021, peacefully at home. He is survived by his wife Ederlinda, his 8 children, 14 grandchildren, 3 sisters, and countless nieces & nephews.

Ignacio Laxamana Espinoza, known by most as Espi, was born in San Matias, Pampanga in the Philippines on February 19, 1938 to Carlos de Guzman Espinoza and Tomasa Pusong Laxamana. He grew up working on his family&#8217;s farm and helping raise... View Obituary & Service Information

The family of Ignacio "Espi" Espinoza created this Life Tributes page to make it easy to share your memories.

Ignacio Laxamana Espinoza, known by most as Espi, was born in...

Send flowers to the Espinoza family.