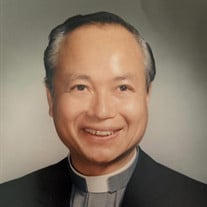 Henry was born in Kowloon, Hong Kong on June 16, 1936. He had a full life and passed peacefully at the age of 85 at home surrounded by family. He was proud to have lived longer than his parents and grandparents. He was the only survivor of 11 brothers and sisters, 8 of whom passed away as children. Henry was lively and adventurous. He grew up in Hong Kong and Xingning, and came to the United States in 1957 as an international student at Valparaiso University in Valparaiso, Indiana. After a couple years of studies, he accepted an opportunity to work with the youth group at True Light Church in New York City. After this internship, he attended Concordia Teachers College in River Forest, Illinois where he met his wife-to-be Gayle Dawn in the school choir. He wooed her affections by singing loudly, louder than any of the 100 other choir members! They fell in love and married in 1964. They both worked as full time teachers while raising their family. After teaching middle school for over 10 years, Henry resigned to follow his calling to serve the Lord through the Lutheran Church Missouri Synod. He attended Concordia Theological Seminary in St. Louis, and graduated in 1988. Henry became the Vicar at Calvary Lutheran Church and also started a mission church in Union City, CA. Later, he was called to pastor at First Trinity Lutheran Church in Oakland, CA, where he served faithfully until his ailing health required him to step down in 2018. Henry had zeal for life. Travelling was always a delight. He also enjoyed going for hikes at Coyote Hills with his family. Henry was very musical. He loved to sing hymns, and he could pick up any instrument and start playing songs "by ear" quite miraculously. That same gift helped him with languages as he spoke 5 Chinese dialects and picked up pieces of other languages quickly. He made friends wherever he went and entertained everyone. He is survived by Gayle Lai; Grace, Evan and Ian Malonai; Joyce, Matt, Alyssa, Nathan and Luke Geisinger; Ruth, Peni, Mone, Jedidiah and Ema Likio; Lily, Sam, Abigail and Michael Chan; and David Lai. He was a beloved father, grandfather and leader of the Lai family. We will miss and remember him. We know that he is with Jesus in heaven singing and sitting in His sunshine.

Henry was born in Kowloon, Hong Kong on June 16, 1936. He had a full life and passed peacefully at the age of 85 at home surrounded by family. He was proud to have lived longer than his parents and grandparents. He was the only survivor of 11... View Obituary & Service Information

The family of Henry Hon Sun Lai created this Life Tributes page to make it easy to share your memories.

Send flowers to the Lai family.