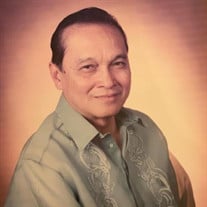 OBITUARY – HECTOR GALLER GATCHALIAN Hector Galler Gatchalian passed away peacefully on Sunday, September 19, 2021 at St. Rose Hospital at the age of 87. An only child of Marcial N Gatchalian and Julita B Galler, he was born on May 16, 1934, in Quezon City, Philippines. He is his high school’s class valedictorian, who went on to graduate with honors from the University of Santo Thomas - Manila with a Bachelor of Science degree in Chemistry and proceeded to be one of the Top 8 finishers in the 1956 Chemistry Board Exams. His stellar achievements did not go unnoticed as he was immediately offered a job by BF Goodrich that same year. After four years, he felt it was time to move on and joined Liberty Flour Mills, Inc. as Laboratory Chemist. Along the way, he settled down, and tied the knot with the love of his life, Priscilla, on December 9, 1962. Hector quickly climbed up the corporate ladder and became the Assistant Vice President of the firm. In the mid-70s, Hector was tapped to lead the firm’s newly established Maya Farms division – an integrated livestock farm, meat processing and canning operation in the Antipolo Hills of Rizal province, Philippines – the firm’s first foray in sourcing power thru biogas and anaerobic fermentation. His flourishing career took an eventful turn when his mom, Julita, or Nanay Itay as we lovingly call her, joined Our Creator in June 1980. He took stock of his career, assessed his family’s future alongside the prevailing economic conditions back then, and made a conscious decision of uprooting the family from its ancestral roots to try its luck in the United States of America. Hector gambled that a better future awaits his family in California, settling first in San Francisco in 1982 before moving to Daly City in 1985, South San Francisco in 1989 and finally Hayward in 2000. Starting from the bottom of the job ladder again at the age of 48 is par for the course, as long as his ultimate goal is reached: a far better future for his family. After stints with Bank of America as a Corporate Research Associate, and with Holiday Inn as Night Auditor, he finally landed at California State Lottery as Material Stores Specialist, retiring from that job in 1998, after 14 years. As a God-fearing man of faith, Hector found solace after joining the St. Augustine Choir (SAC) Music Ministry in the early 90s, sharing his God-given gift: the gift of singing. A natural tenor, his musical talent brought immense joy, pride and fulfillment, not only to his immediate family but to his SAC family who fondly call him Daddy G. He is one of the pillars of the SAC family, regularly counted on as one of the cantors leading the congregation’s prayerful worship. At family gatherings and special occasions, not a moment will pass by without him giving in to the persistent clamor to render his signature song: My Way. Hector was a loving husband and a strong, quietly dignified father figure who is the epitome of sacrifice – a patriarch who happily sacrifices all his comfort as well as his flourishing career for that of his children. Dad has never been one to call attention to himself. He’s happy to remain in the background: to be that unsung, unpraised, unnoticed yet most valuable asset and endearing symbol of the family. He’s always there to encourage and inspire through his words and deeds – a father that exudes quiet confidence and instilled an abundance of humility to his four children and five grandchildren. He is survived by his wife, Priscilla, along with his sons: Eric Joel, Erwin Mari, Edgar Thaddeus and Hector Joseph; daughters-in-law Irma De Jesus, Mitzi Bermudez, Lourdes Albano and Leslie Canlas; grandchildren Ethan Nowell, Dominique Gabrielle, Sofia Ysabel, Evander Mitchell, and Eohann Mikhail, and last but not least, Ellie Mae, the Gatchi family dog. Hector spent his remaining days surrounded by the unconditional love and support of his family and friends. He lived a long and fulfilling life filled with cherished memories. Visitation is scheduled at the Mission Chapel, Chapel of the Chimes, 32992 Mission Blvd, Hayward, CA 94544 on September 30, 2021 and October 1, 2021 from 4:00 to 8:00 pm. A funeral liturgy will follow on Saturday, October 2, 2021 at the Mission Chapel of Chapel of the Chimes, 32992 Mission Blvd, Hayward, CA 94544 at 8:30 am followed by the burial. The song indeed has ended, but the melody lingers on. May he forever rest in peace.

OBITUARY &#8211; HECTOR GALLER GATCHALIAN Hector Galler Gatchalian passed away peacefully on Sunday, September 19, 2021 at St. Rose Hospital at the age of 87. An only child of Marcial N Gatchalian and Julita B Galler, he was born on May 16,... View Obituary & Service Information

The family of Hector G. Gatchalian created this Life Tributes page to make it easy to share your memories.

Send flowers to the Gatchalian family.