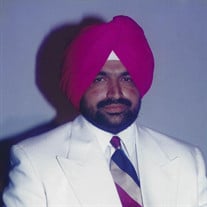 Gurmel Singh Dhaliwal, 54, of Fremont, California, passed away on July 24th, 2020. He was born in Dhaliwal Bet, Kapurthala, India on December 2nd, 1965. Gurmel received a Bachelor of Arts from DAV College Jalandhar. He was married to Rasnadeep Kaur Dhaliwal on July 26th, 1995. Gurmel had a career in Production for Tesla. He found his strength and his will to live in work. He was extremely passionate and innovative who was born with a creative, thriving mind. Skilled in machinery, he was a production associate in various manufacturing companies, but the company he loved to work for the most was Tesla. Tesla was a perfect fit for his gifted, visionary mind where he skilled himself in various forms of work and was on the ground field building cars of the future that were aimed to save the environment and preserve nature's beauty. Loving nature and appreciating the simple things in life is what defined him and he found his hands as his tools which he used to sculpt the world around him in form of PC boards to car to robots...He had a mind that was unbeatable and could never be competed by another's...The beauty of his mind was in its genuine ability to innovate, cleverly weave words that even won cold hearts at work, and his ability to be original...and come up with original ideas never thought of before. Just like his soul, his mind was beautiful that carved the world around us. He found his passion in Tesla because of how its theme of saving nature synchronized with his core belief of respecting God's world and appreciating its simplest beauty. The wide smile that lit up his face was one that I never saw on anyone else's except his when he talked about work...He loved his job and truly he was one of those rare people who appreciate and are passionate about their career and love their boss. He was quoted as a man with wisdom who brought the company to a newer level. Loved by all of his co-workers and often seen as a father to many, he was the mentor and guide to everyone...he was their man who everyone could depend upon and trust...He was an honest, loyal employee, yet, once who was courageous and full of valor. He was brave and always emailed Elon Musk to let him know what changes the production line needed to increase its capacity and surprisingly Musk listened and changes happened. That was Gurmel. The man who gave his heart...his entire life to his work because his job gave him the will and passion to live since work was where he was able to put his skillful mind to good use and bring positive change into the world while doing what he loved...which was to innovate. What gave him peace was praying and connecting to God every day. Over the course of his life, he entwined his palm with God's and embarked on a path of life that God wants for all...appreciating the simplest things in life, serving his family and loved ones, donating and being charitable to others and anyone in need, and praying and worshipping in God' name. He believed our fate had already been decided by God and that we were just characters part of a drama that was run by God himself. He accepted life and death. He was fearless...his faith taught him to be fearless and even accept death. He said all we can do in our life is do positive deeds and expect nothing in return because, after all, our positive deeds serve God's word and that is what matters the most. God is our ultimate decision maker who will look at our deeds and decide our fates after death. He was a man who was fascinated by his faith and often told me the mystery that existed after life...yet, left it incomplete...wanting to keep the mystery and accept God's beautiful mysterious world beyond this planet. Praying was what gave him hope and that is what he loved the most...because praying connected him to God which he wanted the most. Gurmel is survived by his wife, Rasnadeep Kaur Dhaliwal and his daughter, Harjot Dhaliwal. A Funeral Service will be held at 9:15am on July 28th, 2020 at Chapel of the Chimes in Hayward, California. To ensure the health and safety of our community, we are following all guidelines set by local, state and CDC officials. If you are planning on attending a service, please contact the funeral home in advance, so that we can plan accordingly.

Gurmel Singh Dhaliwal, 54, of Fremont, California, passed away on July 24th, 2020. He was born in Dhaliwal Bet, Kapurthala, India on December 2nd, 1965. Gurmel received a Bachelor of Arts from DAV College Jalandhar. He was married to Rasnadeep... View Obituary & Service Information

The family of Mr. Gurmel Dhaliwal created this Life Tributes page to make it easy to share your memories.

Send flowers to the Dhaliwal family.