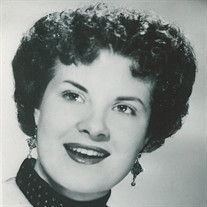 Gloria Jean Mekolites Gardner, 89, of Hayward, CA, passed away peacefully on Sunday, January 10th, 2021. Gloria was born on March 6th, 1931 to William and Bernice Mekolites in Easton, Pennsylvania. As a little girl, her parents decided to uproot to the Bronx, New York, where she then spent the majority of her childhood. She attended Cathedral All Girls Catholic High School in Manhattan, New York, and graduated at the St. Patrick’s Cathedral in June of 1948. After graduating, she landed her first job at Equitable Life Assurance Company in Manhattan as well. After working in the city, she found interest in Roller Derby. So much so that she quit her job in the city at 18 years old, and headed west on a bus to Chicago, Illinois to attend the Training School for Roller Derby. She skated in her first Roller Derby game on July 8th 1951 in Minneapolis, Minnesota. In 1951, she met William "Billy" Gardner at the training school, and they wed in Fort Wayne, Indiana in May of 1953. After retiring from the Derby, Gloria spent her time surrounded by her family and friends. Traveling to new places, attending the Roller Derby Reunions, Red Hats, and supporting and attending her grandchildren's extra-curricular activities were amongst some of her favorite things to do. Most of all, Gloria simply loved spending time with her 3 children, and her 4 grandchildren. Gloria was proceeded in death by her husband of 63 years, William Gardner; her parents William and Bernice Mekolites; brother William Jr. Mekolites; and sister Shirley Blomquist. She is survived by her 3 children, son, Jerry (Julie) Gardner of Martinez, CA; 2 daughters, Geralynn Rhoades of Princeton, MN; and Allison (Tony) Keahi of San Lorenzo, CA. And 4 grandchildren, Nick Gardner, Tyler Keahi, Haley Keahi, and Amanda Rhoades. As an expression of sympathy, memorial contributions may be sent to St. Jude's Children's hospital in her honor.

Gloria Jean Mekolites Gardner, 89, of Hayward, CA, passed away peacefully on Sunday, January 10th, 2021. Gloria was born on March 6th, 1931 to William and Bernice Mekolites in Easton, Pennsylvania. As a little girl, her parents decided to... View Obituary & Service Information

The family of Gloria Jean Gardner created this Life Tributes page to make it easy to share your memories.

Send flowers to the Gardner family.