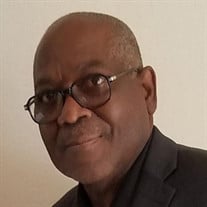 Gilbert &#8220;Richard&#8221; Armstrong was born in New Orleans, Louisiana on February 23, 1947. Gilbert was the son of Ruth Williams Armstrong, he was the 5th child of 15 children. Gilbert served in the United States Army where he fought... View Obituary & Service Information

The family of Gilbert Armstrong created this Life Tributes page to make it easy to share your memories.

Send flowers to the Armstrong family.