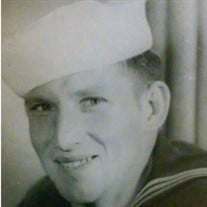 With great sadness we regret to announce the passing of George R Routier. George was born on Feb 24, 1928 in South Dekota and passed on Aug 27, 2021 in Fremont CA, He is proceeded by wife Kathyleen Routier, he is survived by 4 children son Bob... View Obituary & Service Information

The family of George R Routier created this Life Tributes page to make it easy to share your memories.

With great sadness we regret to announce the passing of George...

Send flowers to the Routier family.