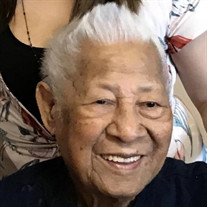 Gelacio “Gil” D. Pascual, 96, of Hayward, CA, passed from this Earth and was called back home by our heavenly Father on August 10, 2020. He was born in the Philippines on December 22, 1923 in San Jose, Nueva Ecija, Philippines. Gelacio graduated with a Bachelor’s Degree in Elementary education and a Master’s Degree in Secondary education. Prior to completing his bachelor's and master's degree, Gelacio served in the military. Gelacio was in the Philippine Army as a Criminal Investigator, a Philippine scout under USAFFE of the US Army, a Military Police in Guam, then became a school teacher and Principal later on in his life. After moving to the United States, he became an Insurance agent while living in Hawaii, and a million dollar producer under Equitable Insurance Co. He was married to Magdalena Dumlao Pascual on October 6, 1946. Gelacio could be described in many ways: God fearing, humble, honest, generous, industrious, patient, kind, and loving. But ultimately, he was a simple man with a simple dream—to be a good family man and a very good provider. He is survived by his wife, Magdalena, his children Benigno, Ruffo(+), Arnel, Editha, and Leila, and their spouses Lily, Aleli, Marilyn, Romeo, and Leo. His grandchildren Jinky, Mark, Alvin, Elaine, Ted, Raquel, Blossom, Paulo, Ryann, and Katrina, and their spouses Cherry, Kanoe, Mario, Joan, Chase, Shaunthele, and Michael. His great grandchildren Ayna, Dale, Kady, Kaylen, Logan, Mariell, Kepa, Jacob, Kaneao, Nawai, Izaiah, Devynn,Theo, Ziah, Ronin, and Kristian. And his siblings Juliana, Gaudencia, and Ernesto. Condolences may be sent to the Pascual family.

The family of Gelacio "Gil" D. Pascual created this Life Tributes page to make it easy to share your memories.

Send flowers to the Pascual family.