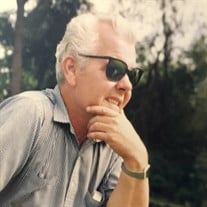 Ray Harris was born in Willenhall, England, on August 9, 1943 to Fred and Edith Harris. He grew up as the fifth of seven children and the first boy! He was loved by his parents and siblings for his curious nature and his love of pranks. He met and married Susan Winfield in 1965 and soon after, his first daughter Jackie was born. She was followed by a daughter Yvonne who passed away shortly after birth then his daughter Wendi. His final child, a son Bryan was born in 1972. Ray spent his time working hard at Charles Snapes as a tool and die maker to support his family and spent many hours in the Territorial Army, Queens Own Mercian Yoemanry, Staffordshire division where he was a staff sergeant. He was well liked and respected both by colleagues and friends-he literally never met a stranger. His common sense, strong work ethic, and again, his sense of humor, made it easy to love him. In 1979 the family took a trip to California to visit friends and soon after decided to emigrate in early 1982. Ray moved to the San Francisco Bay Area and began working for Porto Stamping then moved to O’Hara Metal products where he would work until his early 70’s. He loved his work and was very proud of the level of detail he put into it. He retired at 68 years old. He enjoyed his time with friends, mostly having a few beers and fishing. He was an avid salmon fisherman who often retold his tales of his days on the boat. He loves to barbecue and smoke his fish and the biggest hamburgers he could make. He also loved traveling and returned to England many times and often went to Hawaii where he liked to go to luaus and watch his beloved ocean. His children grew up and he became a grandfather to Darian, Jarrod and Tahlia. They loved their “Ray” and have nothing but fond memories of his kindness and patience with them. He was proud of them but they were more proud of him and his no-quit attitude. Ray learned he had cancer only three weeks before he passed away. He refused to believe that it was serious and insisted in walking into chemotherapy two days before his very sudden passing. He arrived on the second floor with oxygen levels in the 50’s but still standing there ready to fight the beast that was destroying his lungs. His family is grateful to all who befriended, loved and cared for Ray over the years. He was a true people person who thrived in social settings and truly valued his friendships. Ray never lost his intelligence or his humor and he never quit. I hope some day we can all say the same about ourselves.

Ray Harris was born in Willenhall, England, on August 9, 1943 to Fred and Edith Harris. He grew up as the fifth of seven children and the first boy! He was loved by his parents and siblings for his curious nature and his love of pranks. He... View Obituary & Service Information

The family of Fredrick Raymond Harris created this Life Tributes page to make it easy to share your memories.

Send flowers to the Harris family.