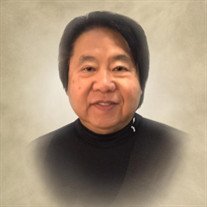 Franklin Sze Yan Leung, beloved husband and father of two children, passed away at the age of 69 on Sunday, January 2. Franklin was born in Hong Kong on September 12, 1952. He attended Rosaryhill School, then Hong Kong Baptist University, and then he arrived in the United States in 1974. He married Molly Lai Si Ip in San Francisco in 1976 and graduated from UC Berkeley in 1979. They moved to Castro Valley in 1990, and together they raised a son and daughter, Andrew and Tiffany. Franklin's passion was social work and he was a social worker at Highland Hospital in Oakland for nearly 30 years. He also did social work for Asian Network for over 30 years. In fact, he continued doing social work even after retirement. His other loves were singing and traveling. Franklin loved singing classic British and American love songs from the 1950s to 1990s. He also loved golden age Cantonese love songs from the 1970s to 1990s. Although he sang in a band as a teenager and occasionally while working, he finally had a chance to focus on singing after he retired. Since then, he's blessed many parties and events in the Bay Area with his singing talent. Family and friends still talk about his performance at Tiffany's wedding. Franklin loved traveling just as much. Some of his favorite places to travel were Hong Kong, Las Vegas, and New York. All three cities had lots of people, shopping, and food. He enjoyed the feeling of waking up each day and doing something new. But Franklin always provided for his family no matter what. He always made sure his wife and children never had to worry about finances, even when his children were grown adults. He especially made sure everyone in the family had enough to eat. Franklin was kind, calm, and always did things his own way. He was a perfect social worker because he could comfort anyone, no matter how angry or upset they were. He managed to remain calm in the worst situations, even his own. His easy-going nature meant he easily made friends. People could tell he really enjoyed life. And he was always kind to others and even kinder as a husband and father. Finally, he always did things his own way. He didn't like to follow strict rules or do what other people were doing. Franklin will now reunite with his father, Johnnie, his mother, King Fong, and his older sister, Lily. He is survived by his wife, Molly, and his son and daughter, Andrew and Tiffany, as well as his two brothers, Stephen and Richard, and his two sisters, Phyllis and Belinda, and finally, many nephews and nieces.

Franklin Sze Yan Leung, beloved husband and father of two children, passed away at the age of 69 on Sunday, January 2. Franklin was born in Hong Kong on September 12, 1952. He attended Rosaryhill School, then Hong Kong Baptist University, and... View Obituary & Service Information

The family of Franklin Sze Yan Leung created this Life Tributes page to make it easy to share your memories.

Send flowers to the Leung family.