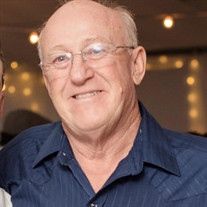 Edwin (Ed) Dale Clark 11/18/1949 - 03/08/2021 Resident of Modesto, CA & Fremont, CA Ed was born to Harry Dale Clark and Gladys Olive Christensen (nee Randall/Clark) on November 18, 1949 in Baudette Minnesota. He passed away on March 8, 2021 due to complications from COVID-19 at Kaiser Hospital in Modesto, CA. Ed graduated from North High School, in Minneapolis, Minnesota on June 14, 1968. After graduation, Ed joined the U.S. Navy on January 23, 1969. While serving in the Navy aboard the U.S.S. Hancock CVA-19, he fought in the Vietnam War. He received the National Defense Service Medal, Vietnam Service and Vietnam Campaign Medal, as well as the Meritorious Commendation Ribbon. He retired from active duty on December 8, 1972 with the rank of E-3, attack Squadron One Six Four, and remained in the Navy Reserve until January 22, 1975. While in the navy, Ed was a participant in the Camp Pendleton Rodeo. Upon leaving the U.S. Navy, Ed moved to San Leandro, CA. He met his first wife Kathleen and soon after, moved to Hayward, CA where he was a goat farmer and trained horses. They later moved to Fremont, CA where he remained a longtime resident. After losing his wife, Ed raised his three young children on his own. In 1994, Ed met his second wife Rita. They had a whirlwind relationship, marrying July 29, 1995. Ed gained three additional daughters and soon they had a son together. Ed achieved his longtime dream of home ownership in 2018 when Rita and he bought their first home in Modesto, CA. They were each other’s biggest supporters with much love and companionship over the years. Ed was one of the kindest and most genuine people you could meet. He had a big jolly laugh and enjoyed making others laugh with him. He wore his heart on his sleeve and left a positive impression on everyone he met. Ed enjoyed many hobbies including gold mining, wood working, horseback riding, attending, and participating in Rodeos, making jokes, and playing guitar. One of his favorite things was spend time with his family as well as attend his grandchildren’s sporting events. Every chance he got, he would volunteer to help out whether barbequing for their teams, playing catch, or filling in for a coach. Ed also volunteered with his longtime church, Evangelical Free, including as a leader in the Awana program. Ed loved to travel and explore his home state of California. He often went to the beach, especially Half Moon Bay, The Redwoods, Yosemite, and looking at snow… but not staying. Ed worked for Tesla since 2018 as a Model 3-line associate. Prior to working for Tesla, he worked for Copper Harbor, Orcon Group, Quality Food service, and Cypress Semi-Conductor. While at Orcon, he suggested a manufacturing process change that saved production costs and is still being used today. Ed is survived by his wife Rita; his children Jessica, James, Mary, Cynthia, Jacqueline, Christian, and Michael; his grandchildren Isabell, Azariah, Chris III, Josephine-Louise, Denessa, Carlis IV, Christian, Hector, Mason, Ellenmarie, Matthew, and Matthias; his brother Larry; his sisters Cheryol, Shellie, and Sherri; his sons-in-law Alex, Bryon, Carlis III, and Chris Jr.; as well as many brother/sisters-in-law, nieces, nephews, cousins, and friends. He is preceded by his grandparents, his parents Harry, Gladys, and Doc; his first wife Kathleen; his grandson Gabriel; his sister Shayla; his brothers Kenneth, Leslie, Richard, and Robert; in-laws Ernest and June; his brother-in-law Eddie; his niece Dawn, and many more beloved family members.

The family of Edwin Dale Clark created this Life Tributes page to make it easy to share your memories.

Send flowers to the Clark family.