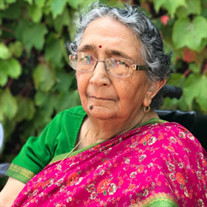 Obituary for Durga Dhar It is with profound sadness that we announce the passing of Durga Dhar. On Monday, 3/22/2021, Mrs. Dhar quietly slipped away from her earthly bonds and gently entered into eternal rest. She was 91. She will be forever loved and missed by her extended family Durga was a bottomless source of love to one and all across all branches of the extended Dhar and Wali families and was fondly known as Mummy, Badi Mummy, Bensaib, Dura Bhabi, Dura Mami and most simply and widely as Dura She was in rehab after her hip fracture and surgery a couple of weeks ago but she was not in pain. Her family saw her by turns almost every day for the last two weeks but, due to Covid, conversed with her through writings in Hindi and using FaceTime, separated by a glass window A day before her passing away she had the closest interaction with us and she amazed us with her sharpness of mind when she enquired if Boytoth (her husband aged 99) was still spending time on his computer to read the world news and stay in touch with the extended family. She valued his disciplined life and was keen to ensure he stuck with it in her absence. She remained alert, wise and caring till her last day. During her last interaction she also wished for a nice bath - keen as she was always about her cleanliness. She did get a nice shower the next morning in her rehab facility. She blessed the rehab staff with her smiles of satisfaction as they changed her into clean clothes from home, served her breakfast on a clean bed with fresh and ironed linens before tucking her in for a nap. It turned out that, like a Kashmiri yogini, she had decided to liberate herself in her sleep from her handicapped body, into an eternal union with the divine. Dura, who hailed from the Wali family from Dukane-Sangeen Fateh Kadal, Srinagar, was a mom to lots of people besides her own children, grandchildren and great grandchildren. She and her husband, Prof. Triloki Nath Dhar, started their life together in Vicharnag, Srinagar in 1944 and they always set a benchmark for their sense of duty towards the broadest network of extended family and treasured a lot of love and respect from one and all She took great care of her father-in-law before he passed in the fifties and her mother-in-law in the sixties and seventies after her hip fracture made her immobile. Our later home at 25 Balgarden, which she architected and supervised the top-quality construction of to the minutest detail, was a permanent and ever open rendezvous for our extended families during the summers. We are grateful to the Almighty for gracing us and letting her choose a very peaceful liberation from the limitations of an aging body after living a full and always giving life Note: If anyone is contemplating to send floral tributes, we encourage a donation instead to Kashmiri Overseas Association (KOA) at this link http://koausa.org/site/donate/#donate (pick General Donations) or to any other cause of your choice Dhar Family of Vicharnag, Srinagar and the extended family (Triloki Nath, Kunti, Sarla, Vijay and Rajni, grandchildren and great grandchildren, Fotedars, Gagroos, Kauls, Jalalis, Tikus, Trisals). Wali Family of Fateh Kadal, Srinagar and the extended family (brother Tej Krishen, Shama, Usha, Vijay Lakshmi, Kachroos, first and second nephews & nieces)

Obituary for Durga Dhar It is with profound sadness that we announce the passing of Durga Dhar. On Monday, 3/22/2021, Mrs. Dhar quietly slipped away from her earthly bonds and gently entered into eternal rest. She was 91. She will be forever... View Obituary & Service Information

The family of Durga Dhar created this Life Tributes page to make it easy to share your memories.

It is with profound sadness that we...

Send flowers to the Dhar family.