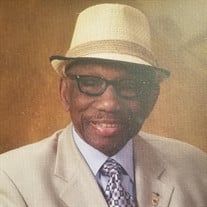 Deacon Fred D. Davis Sr. Fred D. Davis Sr. was born July 13, 1935 in Meridian, Mississippi. He entered into rest Thursday, September 3, 2020 in San Leandro, CA. A devoted husband of 46 years to Minnie Davis who preceded him in death on July 24, 2006. His loving father and mother, Willie Davis and Mattie Davis, and his brother Joe Willie Davis also preceded him in death. He leaves to cherish his memory, his son Fred D. Davis II (Lynn Foxall); grandson, Isaac Douglas Davis of San Lorenzo, CA; a daughter, Jacqueline E. Thompson (Gregory) of Newark, CA; sister, Lobell Moore of Meridian, MS; and many relatives and close friends. In his younger years freshly out of school, Fred D. Davis Sr. enlisted and served in the U.S. Army on June 25, 1954. He served with honor in the Korean War. He received an Honorable Discharge on May 9, 1958. Fred continued his education at Merritt College, Oakland CA and was later employed at Ed Chovanes Ford, originally located in Oakland, CA. Fred became an accomplished mechanic, and had compassion for the automobile industry. During Fred’s free time he enjoyed restoring his own collection of automobiles, along with jogging, taking long walks and watching older western movies. While raising a family, Fred D. Davis Sr. loved the Lord and on Sundays, he and his family attended Palma Ceia Baptist Church. He became deeply involved in the church. He served as an Usher, Sunday School teacher, member of the Male Chorus, the Brotherhood and later was ordained as a Deacon. He believed in being a good humanitarian and would always lend a helping hand to others in need when possible. He also joined the Lions Club where he assisted in raising money for many charities prior to and after his retirement. He will forever be loved and missed by his devoted family and friends. Due to Covid-19, only 20 invited guests are allowed in the Chapel during the funeral service. However, a live stream of the service can be viewed by contacting William H. Little at [email protected] to obtain the required access information. SCHEDULE OF EVENTS Viewing and Quiet Hour – Wednesday, September 23, 2020 from 5:00 PM to 8:00 PM(PST) Funeral Services – Thursday, September 24, 2020 at 11:00 AM(PST) Interment – Immediately following the funeral Services. Location: All activities will be held at Chapel of the Chimes, 32992 Mission Blvd, Hayward, California 94544

The family of Deacon Fred D. Davis Sr. created this Life Tributes page to make it easy to share your memories.