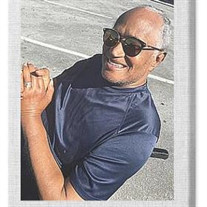 Carlton Lorenzo Trodder was born on November 2, 1945 in Memphis, Tennessee, the third son to the parents of Lewis Charles Trodder, Sr. and Mary Beatrice Lewis Trodder. At the age of 5 years old, he and his family moved to St Louis, Missouri where he grew up. In 1965, Carlton graduated from Charles Summit High, St. Louis, Missouri, and later moved to California, where he majored in Political Science at the College of Alameda. Carlton started work at Pacific Bell in 1972 as a Janitor and was later promoted as a Cable Tester and last promotion was to a Communications Technician where he remained until he retired after 30 years of service in 2002. Carlton married his first wife, Jackie and had two children, Rodney and Cheree Trodder. On September 20, 1986 Carlton married the love of his life, Margaret. Their love was built on trust and faith. Together, they raised three children, Alex Clark, Joshua and Brittany Trodder. All of his children received his love, lectures and advice, as he wanted nothing but the best for all of his children. Carlton always shared encouraging words of wisdom and was a role model for many. Carlton was accomplished at being more than just a Communications Technician at Pacific Bell. He taught himself electrical work and did this as a side job to help many in need. He enjoyed helping out at his church with handyman maintenance jobs. Carlton was the type of person who would go the extra mile to help anyone in need. Most of all, Carlton loved his family and friends and enjoyed memorable times with them. He always lived life to the fullest which made him a very exciting, unique, and lovable person as soon as you met him. Carlton developed a love for “acting” from his first time being on stage at the Oakland Ensemble Theater, where he acted in a Melvin Van Peebles play, “Ain’t Supposed to Die a Natural Death”. He went on to act in numerous plays- too many to mention. One of his many accomplishments was that he co-directed a play featured on KQED, “The Light is Still On”. Carlton accepted Christ at an early age and always put God as head of his life and home. Carlton was a devoted and faithful member of Cornerstone Missionary Baptist Church, under leadership of Dr. Lester L. Cannon, Sr., where he served as an Honorary Deacon, an Usher, and an active member until his illness in 2012. Even in the end, his faith never wavered, and he took great joy in attending Bible study, reading his bible, and praying to Jesus, who is his Lord and Savior. He departed this life on May 18, 2021 and was preceded in death by father, Lewis C. Trodder, Sr., mother Mary B. Lewis Hall Trodder, brothers, Roland A. Trodder, Lewis C. Trodder, Jr., uncles, Merci D., Melvin, Ardell, Charles, Lorenzo Lewis and Aunt Luna Lewis. Carlton passed away peacefully and leaves to cherish his memory, his loving wife of 35 years, Margaret Trodder, sister Patricia Hall, children Rodney (Castelle) and Cheree Trodder, Alex Clark (LaNora), and Joshua and Brittany Trodder; grandchildren Jacquis, Jon, Kristina, Amber, LaTasha, Kayla, Ryan, Riley, and Red; great-grandchildren Alexandria, Aiden and Brooklyn, and his beloved Aunt Sara Lewis and a host of other relatives and friends.

Carlton Lorenzo Trodder was born on November 2, 1945 in Memphis, Tennessee, the third son to the parents of Lewis Charles Trodder, Sr. and Mary Beatrice Lewis Trodder. At the age of 5 years old, he and his family moved to St Louis, Missouri... View Obituary & Service Information

The family of Carlton Lorenzo Trodder created this Life Tributes page to make it easy to share your memories.

Carlton Lorenzo Trodder was born on November 2, 1945 in Memphis,...

Send flowers to the Trodder family.